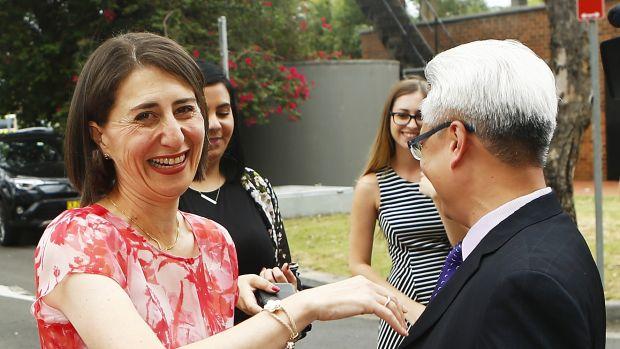 Recent remarks by Alan Jones, Ross Cameron and Bronwyn Bishop about Gladys Berejiklian occasioned me to reflect on the apparent oversupply of bongo juice in the community. Then reality took over and I remembered that old perennial explanation: delusions … of grandeur.

Gough Whitlam’s biography A Certain Grandeur was well named. Sure, he made terrible mistakes, trashed the economy and thousands of jobs in the process. At the same time he touched the hearts and minds of a generation. Beginning a campaign speech with the words “Men and women of Australia” was just the start. He articulated a grand vision for us, who we were and wanted to be.

No one will give a similar title to a book about Kevin Rudd. Certain his God-given gifts gave him special insight, he was determined to be prime minister. It didn’t go well. The Labor Party dumped him. Undeterred by what he saw as their mistake he proceeded, despite protestations to the contrary, to undermine his successor and returned to the prime ministership.

Australia’s decision to sack him at the subsequent election didn’t bruise his self-belief at all. He set about telling the world that it would be a better place if he were in charge of the United Nations. Labor luminaries said he was delusional. They didn’t need to tell us.

Tony Abbott’s story has some frightening similarities. Some people when being put together in the great conception factory of life just get the wrong “self-perception” part. They see themselves as having much more insight than the rest of us. They have not the slightest inkling that we see them as seriously out of touch and in need of professional help. Without the capacity to see the world, and yourself, through other people’s eyes, politicians and candidates rightly come across as out of touch and delusional to varying degrees.

It’s quite common to hear unsuccessful political candidates explaining their loss as a consequence of something other than themselves: “they gave their preferences elsewhere” being just one example. The introspection required to ask “why?” and contemplate any possible inadequacy on their part eludes them.

It’s not only political leaders or people in politics who are afflicted. Comedians, movie stars, authors and others almost line up to share the insight that apparently comes free with fame for the benefit of lesser mortals like you and me.

On the one hand, It’s a measure of how far we have fallen in our political discourse that the views of a long-time radio host and two former politicians as to the suitability of a brand spanking new premier will be given such prominence in our news outlets.

Why these three? The answer is not that they are the fount of all wisdom but rather that when a very popular move was made they were offering what the media need – colour, conflict and contrast.

We can’t simply blame the media. We say we want a more positive political discourse, but in reality the reason the political clickbait is nearly always tempting us with colour, conflict or controversy is because that’s the bait we are most likely to take.

The views of Jones, Cameron and Bishop are no more or less valuable than yours or mine. They rate equally with the so-called rednecks and deplorables, the self-appointed intellectuals, the busybodies, the academics, the businessmen, the retired senior citizens and the first-time voters. We all, rightly, get an equal say.

Cameron is from NSW and yet even with the benefit of proximity he still couldn’t see that Gladys was a shoo-in. Cameron once made one of the sharpest, funniest and most effective party-room contributions I heard in 23 years. As they say, one swallow does not a summer make. To try and belittle Berejiklian’s extraordinary achievement as a factional deal shows what little insight he has. Losing a marginal seat clearly didn’t sharpen up his antennae. It was just cheap headline grabbing from a guy who knows that conflict is clickbait.

Bronwyn suffers unfairly from being seen as a stereotype, which she helped create and would be better off without. There’s a much smarter and much nicer Bronwyn than many know. Nonetheless it was her and not some hologram that made the catastrophically stupid decision to go by helicopter from Melbourne to Geelong at our expense. We all make mistakes, but I doubt that after that one many people will put much faith in her judgment.

Jones spent 10 years writing missives to John Howard imploring him to sack me. It takes a serious ego and a good dose of delusion to imagine that the prime minister desperately needs your regular advice. Howard clearly didn’t take too much notice of the seemingly endless missives. Jones speaks at a high public volume because without it no one will listen. So really while these three think we all need the benefit of their wisdom, we can all calmly come to our own conclusions.

As for Gladys, she’s one of the most genuine, hard working, decent people I’ve met. She’s been that way since her Young Liberal days. Unlike some would-be members, Gladys never conveyed the idea that she was a potential star. She simply wanted to be a good member of Parliament and in doing so to use the opportunities her parents gave her. She’s neither a backstabber nor a self-promoter nor in any way delusional. You get what you see. She has put the hard yards in for the long haul. I’d choose a stayer over a sprinter for premier any day. If you’re after authenticity in politics, Gladys has got it. In spades. Gladys will bring both grace and gravitas to the job. Every state should be so lucky.