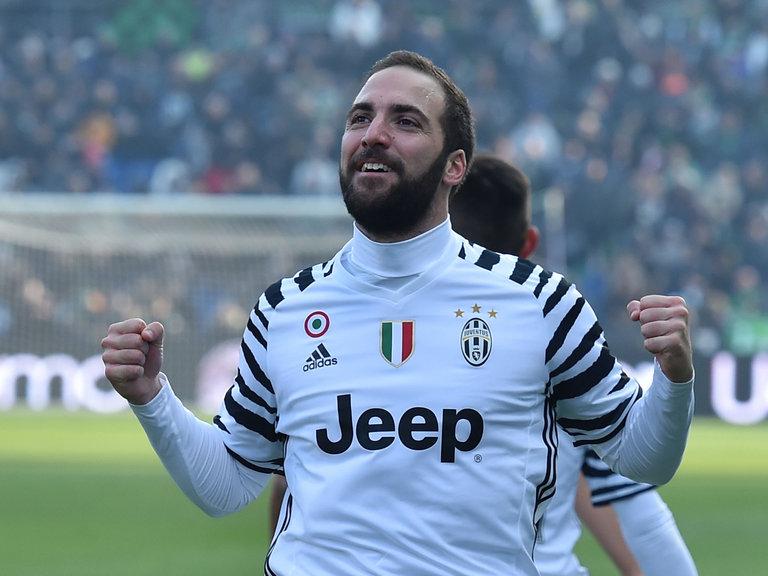 Gonzalo Higuain reached 15 goals for the Serie A season as Juventus reinforced their position as league leaders with a 2-0 victory at Sassuolo on Sunday.

The 90 million euro striker continued his recent hot streak with a ninth-minute opener before Germany midfielder Sami Khedira made a rare appearance on the scoresheet in the 25th minute to guarantee all three points for Massimiliano Allegri’s men.

With closest challengers Roma going down to a surprise 3-2 loss at Sampdoria, the Turin club are now four points out in front ahead of next weekend’s Derby d’Italia clash with fast-improving Inter Milan.

Over in Genoa, Roma’s four-game winning run came to a crashing halt as Luis Muriel settled a five-goal thriller in Samp’s favour.

Bruno Peres soon saw his fifth-minute away goal scrubbed out by home winger Dennis Praet, with the prolific Edin Dzeko restoring Roma’s lead shortly after the hour mark. However, substitute Patrik Schick and Muriel grabbed a goal each in a three-minute blitz to fire Samp to a first victory in seven attempts.

Napoli could have gone level on points with Roma had they beaten lowly Palermo later, but it was the Sicilians who felt hard done by at the end of a 1-1 draw.

Ilija Nestorovski stunned the San Paolo with a fifth-minute opener and Napoli waited until the 66th minute to salvage a point through Dries Mertens. Edoardo Goldaniga’s sending-off on the stroke of full-time gave new Palermo boss Diego Lopez food for thought, yet his drop-zone dwellers hung on.

Ten-man Fiorentina and Genoa provided plenty of goals and entertainment in Tuscany with Giovanni Simeone having the last word in a 3-3 draw.

Josip Ilicic and Federico Chiesa gave Fiorentina the upper hand with goals either side of the break but Genoa promptly hit back through Simeone – the son of Atletico Madrid boss Diego – and Oscar Hiljemark.

Nikola Kalinic thought he had done enough with his 62nd-minute strike for La Viola, but Simeone stuck away a spot-kick – conceded by substitute Federico Bernardeschi, who was sent off – with four minutes left.

Sixth-placed Atalanta missed an opportunity to make strides towards the Champions League places when they were held to a 1-1 draw at Torino in the early game.

Spanish winger Iago Falque put the Granata ahead after 16 minutes with visiting youngster Andrea Petagna rescuing a point in the 66th minute.

Behind Atalanta in the table are AC Milan, who suffered a surprise 2-1 defeat at Udinese.

Everton loanee Gerard Deulofeu endured a league debut to forget as the Rossoneri let their advantage slip away after Giacomo Bonaventura notched in the eighth minute. Cyril Thereau equalised in the 31st minute and, with a quarter of the match remaining, Rodrigo de Paul clinched Udinese their valuable win.

Crotone may not be dead and buried after all. The promoted club have propped up the standings since making their top-flight bow in August but on Sunday they took out their frustration on Empoli, victims of a Diego Falcinelli-led 4-1 stuffing at the Stadio Ezio Scida.

Adrian Stoian got the ball rolling with an opener for the hosts in the 24th minute, only for Levan Mchedlidze to plunder an all-too-familiar leveller six minutes before half-time.

No one expected what happened after the break as Falcinelli restored Crotone’s advantage on 56 minutes before laying claim to the matchball with a converted penalty and a last-gasp strike in stoppage time.

Davide Nicola’s men are, however, a daunting eight points from safety with 17 matches remaining.

Elsewhere, mid-table residents Cagliari and Bologna drew 1-1 in Sardinia thanks to goals from visiting striker Mattia Destro and Marco Borriello. Swedish full-back Emil Krafth and goalkeeper Federico Viviani were dismissed at the death for 12th-placed Bologna.

On Saturday, in-form Inter Milan moved up to fourth with a 3-0 success at home to bottom-of-the-table Pescara – their seventh consecutive Serie A victory.

After Lazio missed their chance to keep the pressure on the top three when they lost 1-0 to Chievo at the Stadio Olimpico in Saturday’s only other fixture, Inter had little difficulty upholding the form book against their struggling visitors.

Danilo D’Ambrosio put them in front in the 23rd minute at the San Siro, then Joao Mario doubled the lead just before half-time. Substitute Eder completed the scoring in the 73rd minute.

Lazio had earlier dominated the chances against Chievo but could not make it count and were made to pay when Roberto Inglese scored the winner against the run of play in the 90th minute.