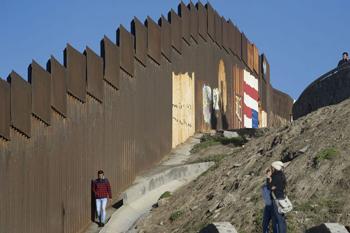 An Israeli security company is making a push in Washington this week to help build Donald Trump’s Mexican border wall following the U.S. president’s praise of Israel’s success in boosting security by fencing off its frontiers.

Executives from Magal’s U.S.-based Senstar unit will show off its FiberPatrol product at a Jan. 31 conference on border security. Officials from the U.S. Department of Homeland Security and other agencies will talk to the gathering of defense contractors in Alexandria, Virginia, according to Magal Chief Executive Officer Saar Koursh. The system, which embeds fiber-optic sensors in long stretches of fences and walls, is already used for perimeter security at airports and seaports around the world, he said.

“We have the right product and we have the experience in Israel that helps in showcasing our product,” Koursh said in a telephone interview Jan. 26.

Magal was a major contractor on Israel’s West Bank barrier, a stretch of sensor-laden fences and concrete walls that was begun in 2002 to counter a wave of Palestinian suicide-bombings. The company has also helped build a fence along Israel’s border with Egypt, which Prime Minister Benjamin Netanyahu presented on Saturday as an example for Trump’s Mexican wall.

Netanyahu was referring to Israel’s “specific security experience which we are willing to share,” Israeli Foreign Ministry spokesman Emmanuel Nahshon said later on Twitter. “We do not express a position on U.S.-Mexico relations.”

In the interview with Fox News, Trump said a wall would be effective in preventing illegal immigration from Mexico.

“All you have to do is ask Israel,” ,” he said. “They were having a total disaster coming across, and they had a wall. It’s 99.9 percent stoppage.”

Palestinians say much of the West Bank barrier intrudes on private land and refer to it as an “apartheid wall.” In an advisory opinion, the International Court of Justice said in 2004 that portions of the project built in occupied territory were illegal.