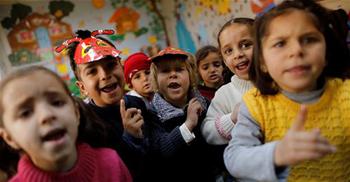 The World Bank has partnered with a number of Turkish agencies and the European Union to construct schools for Syrian refugees in Turkey, according to a statement from the lender.

Funded by the EU and implemented by the KFW Development Bank and the World Bank, the “School Construction Projects under the Facility for Refugees in Turkey” aims to support the Turkish government to improve access to education for Syrians under temporary protection, as well as their host communities, by expanding disaster-resilient education infrastructure in priority provinces, according to the statement that was released on Jan. 30.

With total financing of 150 million euros from a European Commission grant under the Facility for Refugees in Turkey (FRiT), the World Bank will administer a recipient-executed trust fund that will be implemented by Turkey’s Education Ministry through its Construction and Real Estate Department (CRED), in coordination with Turkey’s Disaster and Emergency Management Presidency (AFAD).

The project will focus primarily on Turkey’s southeastern and southern provinces of Adana, Mersin, Hatay, Kilis, Kahramanmaraş and Osmaniye, where the majority of school-age Syrians reside, and where Turkey currently hosts the highest concentration of out-of-school students. In addition, the project will facilitate the expansion of education infrastructure investments in Istanbul, Ankara, Bursa, İzmir, Konya and Kayseri, which host a high number of Syrian refugee children and possess a concentration of out-of-school Syrian students at the district level.

As the project aims to provide additional education facilities to help implement the government’s policy of integrating Syrian students into Turkish schools, the direct beneficiaries will be both Syrian children who currently do not have access to education and the Turkish residents of local communities, according to the statement.

The Education Ministry will construct approximately 56 formal and informal education facilities, reaching more than 40,000 direct beneficiaries with 150 million euros of EU-funded support administered through the World Bank, the statement said.

The project aims to support school infrastructure investments, enhance a quality learning environment and increase project management and technical capacity for infrastructure, according to the statement.

“Today, Turkey hosts more refugees than any other country, and about 2.8 million of these refugees are Syrians,” said Johannes Zutt, the World Bank’s country director for Turkey.

“To date, the government and people of Turkey have helped most of these refugees to register, find housing and obtain key health and education services. Expanding access to education remains a critical challenge because large refugee numbers are overwhelming local schools and because children, whether or not they are refugees, cannot afford to wait to acquire the learning needed to hold a job,” Zutt said.

“The World Bank is happy to work with the government and the European Union to build the schools needed to enable Syrian refugee children, as well as Turkish host-community children, to obtain work and to contribute productively to the social and economic life of Turkey,” he said.

“We are pleased to contribute to Turkey’s admirable efforts to respond to this very unfortunate Syrian refugee crisis as it becomes clearer that the situation poses a complex development challenge for the region,” said David Sislen, the World Bank urban and disaster risk management practice manager for Europe and Central Asia. “Turkey is one of the countries that is most affected. Based on our ongoing partnership for improving overall disaster risk management and reducing disaster risks in Turkey for almost 25 years now, we are pleased to see that the safe schools program in Turkey is evolving to help Syrian kids to be back at school.”