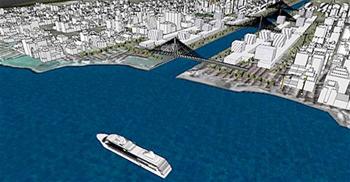 Three artificial islands will be built in the Marmara Sea and the Black Sea with excavation from the construction of Istanbul’s controversial Kanal Istanbul project, aiming to build a “second Bosphorus,” daily Habertürk reported on Jan. 31.
Some 2.7 billion cubic meters of excavated land will be moved during the construction of Kanal Istanbul, which is expected to go out on tender this year.

Transportation, Maritime and Communication Minister Ahmet Arslan previously announced that they want to go out on tender for the Kanal Istanbul project, as the route and financing efforts regarding the project are ongoing.

Kanal Istanbul, which aims to build a canal across the city’s European side to supplement the Bosphorus, was among the “crazy projects” that then-Prime Minister Recep Tayyip Erdoğan announced ahead of the 2011 general election.

The artificial islands are planned to be built at the exits of Marmara Sea and the Black Sea, and will be income-generating in order to finance the planned canal. The authorities are also planning to construct residences on the islands.

Not all excavated earth will be suitable to build the artificial islands, so it will be subjected to enhancement depending on its chemical values. In particular, soil with acid and metal density will be separated.

Seismic movements and depth of the sea will be in consideration while determining the spot where the islands are built.

Initially, rocks from nearby stone quarries will be brought to build the islands. After the fortification efforts conducted on the rocks, excavation from Kanal Istanbul will be poured onto them. The islands will be adapted for maritime traffic and there will be ports and berthing areas.

“There will be life on the islands. There could be restaurants. There are examples of these in the world,” unnamed sources told daily Habertürk, while adding that several aspects of the project are not yet clear.

According to the authorities, three islands are currently being planned to be constructed, the size and location of which will be determined after feasibility and excavation efforts.