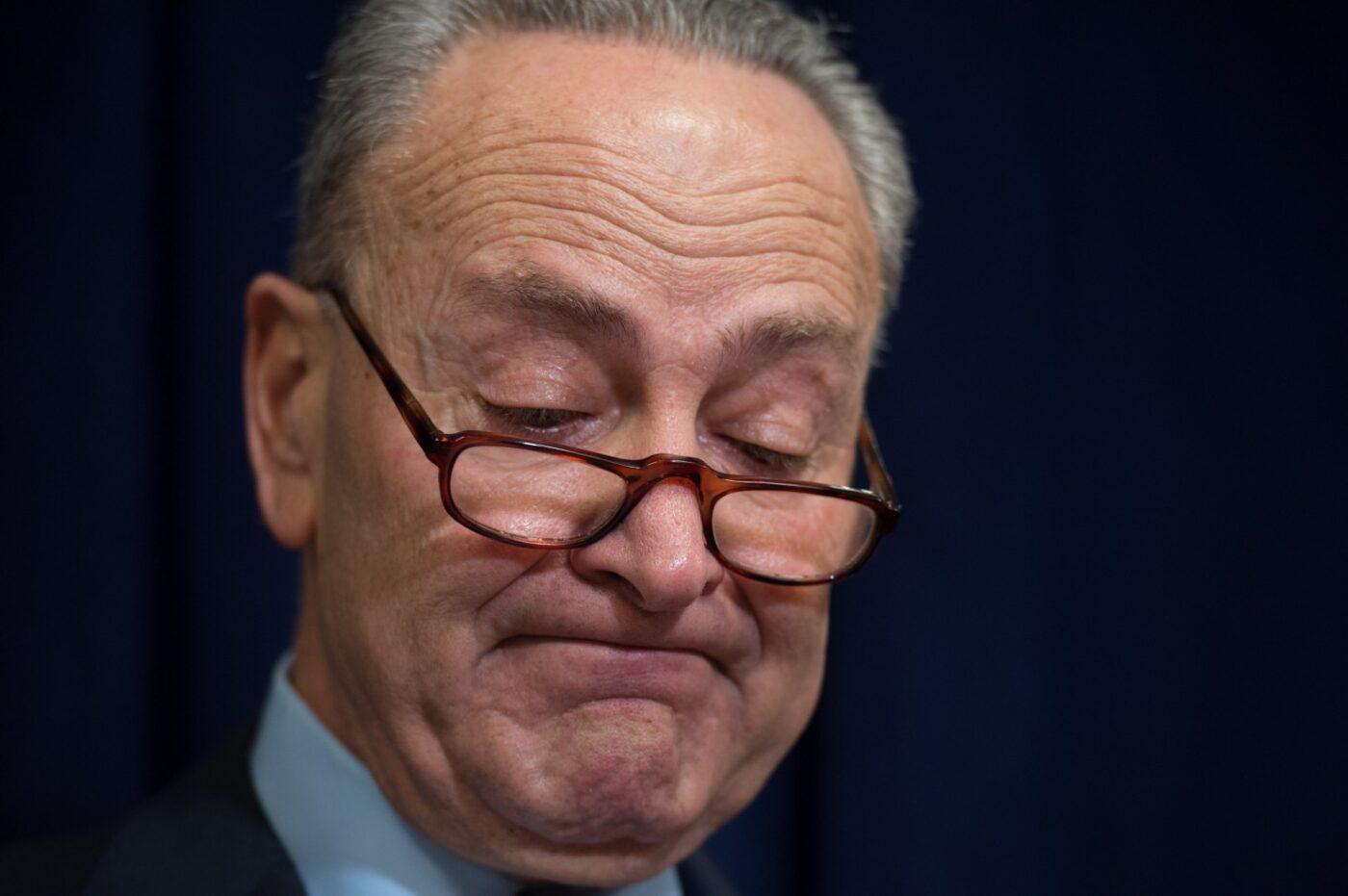 Democrats on Monday all but abandoned their pledge to find common ground with President Trump after he banned some foreign nationals from entering the United States, while Republicans angrily accused him of not telling them ahead of time about the controversial order.

Seizing on growing public outcry over Trump’s executive order temporarily banning citizens from seven Muslim-majority countries and refugees from across the globe, Democrats on Capitol Hill launched what they said would be a protracted fight on several fronts. It will include public protests against the ban, delaying Cabinet confirmations and an attempt to reject Trump’s pick to serve on the Supreme Court, an announcement expected Tuesday.

The plans represent a sharp pivot in Democratic strategy after weeks of vowing to work with Trump and Republicans in areas of agreement — and to allow noncontroversial nominees to be quickly confirmed.

But “then Trump shredded the Constitution,” said one senior aide familiar with ongoing strategy talks who spoke on the condition of anonymity.

“We should be using our time on the floor to talk about the dangerous consequences to U.S. national security by this executive order. We shouldn’t be rushing through any confirmation votes this week,” said Sen. Christopher Murphy (D-Conn.).

“We can take a pause in confirmation votes to try to get this executive order right. You know this is going to get Americans killed if we don’t take our time to understand what this order is and what its consequences are,” he added.

Trump’s ban also significantly deepened fissures in his already fragile relationship with congressional Republicans, with GOP leaders on Capitol Hill angrily complaining Monday that they were not consulted before the order was issued.

At least a dozen key GOP lawmakers and aides said Trump’s order took them by surprise, even as the White House insisted that it collaborated with Congress. House Speaker Paul D. Ryan’s political team sought to reassure donors and other supporters that the temporary ban does not amount to a “religious test.” And a steady stream of Republican lawmakers released carefully tailored statements expressing concerns about the order.

But others spoke out more forcefully. Senate Foreign Relations Committee Chairman Bob Corker (R-Tenn.) said Monday that he was not briefed before the order was signed.

“I know that they said they talked with some staffers on the Hill — not in our office,” Corker said.

The disarray over Trump’s fulfillment of a core campaign promise underscored the increasingly strained relationship between the new White House and the Republican congressional majority. It comes after a rocky first week and a half punctuated by confusion over health-care and tax changes, as well as frustration with the president obsessing over crowd size and his loss of the popular vote in November.

Asked whether he was consulted in the drafting of the order, Senate Majority Whip John Cornyn (R-Tex.), the No. 2 Republican in the Senate said simply: “I wasn’t.”

Pressed on when he first learned about the order, Corker answered that it was Friday, after it was signed. “I guess one of you guys probably told me about it — thank you for that,” he told reporters.

Politico reported Monday night that senior House Judiciary Committee staffers helped Trump’s team draft the executive order without informing party leadership. A committee aide, speaking on the condition of anonymity, said in a statement following the report: “Like other congressional committees, some staff of the House Judiciary Committee were permitted to offer their policy expertise to the Trump transition team about immigration law. However, the Trump Administration is responsible for the final policy decisions contained in the executive order and its subsequent roll out and implementation.”

On Monday evening, Senate Democrats sought to quickly pass legislation that would rescind Trump’s ban, but there was insufficient GOP support.

Confirmation delays began, as well, when Democrats blocked a committee from meeting to approve Trump’s nominee for treasury secretary, Steve Mnuchin, to the full Senate. The Senate Finance Committee is expected to consider the former Goldman Sachs banker on Tuesday, at the same time it will vote on the nomination of Rep. Tom Price (R-Ga.) to lead the Department of Health and Human Services.

Amid the Democratic outcry, Trump and his aides strongly defended the ban and faulted Democrats for trying to “obstruct” his Cabinet nominees.

“We actually had a very good day yesterday in terms of homeland security,” Trump said at a White House event. During a meeting with small-business leaders, he blasted Democrats for delaying the confirmation of his nominees “for political reasons. Just politics.”

But it remained unclear just how united Democrats would remain. On Monday, the Senate voted on a key procedural step toward the nomination of former ExxonMobil chief executive Rex Tillerson for secretary of state, with four members of the Democratic caucus supporting him — Heidi Heitkamp (D-N.D.), Angus King (I-Maine), Joe Manchin III (D-W.Va.) and Mark R. Warner (D-Va.).

Sen. Dianne Feinstein (D-Calif.) said she did not think there would be further delays of Sen. Jeff Sessions (R-Ala.) as attorney general; and it was unclear whether Democrats would succeed in delaying a hearing Tuesday for Price.

How far Democrats go will be closely watched by the liberal activists who joined them to protest Trump’s ban Monday night on the steps of the Supreme Court.

After the sun set and Democrats made their way from the Capitol, chants of “hands too small, can’t build a wall” and “build a fence around Mike Pence” alternated with “walk the walk!” — a command to the Democrats themselves.

And when House Minority Leader Nancy Pelosi (D-Calif.) told the crowd, “What the president did is not constitutional,” one protester retorted: “You’re not doing anything if you don’t stop Sessions!”

Meanwhile, statements from top-ranking Republicans in the House and Senate were at odds with comments earlier in the day from White House press secretary Sean Spicer.

“There were staff from appropriate committees and leadership offices that were involved,” Spicer told reporters at a briefing. He refused to specify which, if any, committees were involved in the decision-making.

Senior House leaders, including Ryan, did not see the text of the order until after it was signed Friday, according to a GOP aide. Antonia Ferrier, a spokesman for Senate Majority Leader Mitch McConnell (R-Ky.), said “it was public” that executive orders “were coming,” but declined to offer further clarity on the level of interaction with the White House.

Spokesmen for Sens. Mike Lee (R-Utah), Rob Portman (R-Ohio) and Lindsey O. Graham (R-S.C.) said the senators were not consulted about the order.

Senate Judiciary Committee Chairman Charles E. Grassley (R-Iowa) said he could not confirm whether his staff was consulted — but he personally did not weigh in on the executive order as it was being drafted. Grassley’s committee is responsible for overseeing the majority of immigration-related legislation in the Senate.

“I’m sure if they said they consulted us, they did,” Grassley said. “But not me personally.”

A member of Grassley’s committee staff worked alongside other congressional staffers to assist the Trump transition team on legislative issues, including early drafting of the executive order, said one Senate GOP aide. However, that staff member did not participate in writing the final order. The White House did not share details of the order with the committee before its release Friday, the aide said.

Several GOP aides who spoke on the condition of anonymity to speak openly about the sensitive discussions said they were frustrated and surprised by the order and were forced to scramble to respond as chaos spread at airports across the country. Many said they felt the administration was moving too swiftly and without respect for critical protocol for vetting executive actions that have been in place for decades.

“This is emblematic of a new, power-hungry White House staff flexing its muscles without consulting the public servants responsible for implementing their fiats. If this type of behavior continues, then this administration is going to lose all of its friends very quickly,” one Senate GOP aide said.

The freshly combative mood of Democrats has also begun to shape the debate over previously uncontroversial nominees. Sen. Bill Nelson (D-Fla.), who faces a 2018 reelection bid in a swing state, sent a letter to transportation secretary nominee Elaine Chao on Monday with seven questions about enforcement of the ban. Failure to answer those questions overnight might be more reason to try delaying her final confirmation vote, aides said.

In the end, Democrats are unlikely to derail the confirmation of any Trump nominees. While they can use procedural tactics to lengthen the time it takes to confirm a pick, just 51 senators are needed to confirm a nominee. Republicans enjoy a 52-seat majority in the Senate.

That is not likely to ease the pressure from the left. On Sunday night, more than a thousand protesters in Rhode Island, organized by the progressive Working Families Party, marched to an event held by Sen. Sheldon Whitehouse (D-R.I.).

At a rally outside the event, speaker after speaker denounced Whitehouse’s vote last week to confirm CIA Director Mike Pompeo and demanded that he reject the rest of Trump’s Cabinet.

“Democrats alone can’t block these appointments, but they can make sure they don’t bear our stamp of approval,” said David Segal, the executive director of the progressive transparency group, into a bullhorn. “They must vote as any one of us would vote — against surveillance, against authoritarianism and against Trump.”

Karoun Demirjian and David Weigel contributed to this report.