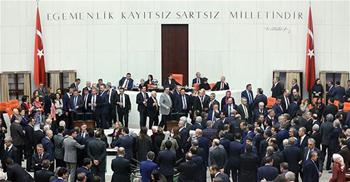 Constitutional amendments that were recently accepted in parliament are expected to be submitted for President Recep Tayyip Erdoğan’s approval by the end of the week, with the ruling Justice and Development Party (AKP) hoping to conduct a subsequent referendum on the articles on April 9.

Review procedures by parliament’s legal units regarding the constitutional amendments were completed days ago after the motion’s passage on Jan. 20. The charter is expected to be submitted to Erdoğan on Feb. 2 or 3 amid heavy criticism from the main opposition Republican People’s Party at the delay.

According to the law, the referendum should officially be held on the first Sunday after the 60th day following the signature of the president. After receiving the charter, Erdoğan will submit the amendment package to the Prime Ministry to be published in the Official Gazette.

The AKP is withholding the charter in order to arrange the date of the referendum as April 9, given that Erdoğan is expected to sign the charter on the same day that he receives it.

The date of the referendum would have been scheduled to take place on March 26 if the law had been presented to the president the day after it passed in parliament. However, the government chose April instead to avoid conducting campaigns in winter conditions given that many village roads are almost impassible in winter in the east.

The parliament, which is slated to resume works next, will take a recess ahead of the referendum after it has enacted several proposed laws regarding the economy. From the end of February, parliamentarians are expected to be in their electoral districts for 40 days of campaigning until April.

A deputy chairman of the CHP, Çetin Osman Budak, filed a questionnaire to Parliamentary Speaker İsmail Kahraman about the ruling party’s delay in submitting the charter to the president.

Given precedents, amendments totaling 70 to 80 articles usually take four or five days to review, Budak said.
“The fact that parliament’s not sending an 18-article charter during this period indicates that there are other calculations being made,” Budak said, implying that the parliament was acting according to the AKP’s agenda.

“The allegations that parliament has acted at the behest of somebody will damage parliament’s reputation and destroy it,” he said.

The CHP’s group deputy chair, Engin Altay, also said the AKP was deliberately delaying the submission of the charter on the grounds that polls indicate a current majority for the “no” side.

“I suspect that the surveys made the Justice and Development Party a bit scared,” he said, echoing colleague Özgür Özel, who said floating voters had started to head toward the “no” camp as the context became more public.

“When the constitutional debate has begun, those who said ‘no’ were two points behind those who say ‘yes,’” Özel said Jan. 29.

“At the moment, none of them expected that ‘no’ votes to be ahead of ‘yes’ by six points,” he added.

“The swing voters were saying that they did not know the text and had no information about the amendment. The discussions in the parliament and the resistance in the general assembly made them aware of the text. The swing voters have started to say ‘no,’” he said.

“[The charter] might be withheld [at parliament] for 15 days. They are delaying it as long as possible. It would not be a surprise if they will try every way to prevent this referendum from taking place.”