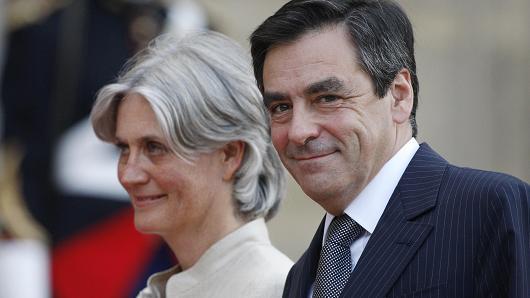 French conservative presidential candidate Francois Fillon and his wife were questioned for five hours by police investigators on Monday as part of a probe into allegations that Penelope Fillon had been paid for fake jobs.

The allegations, which Fillon rejects, are sapping the popularity of the former prime minister and could shake up the April-May presidential contest, for which he has so far been the clear favourite.

Fillon said in a statement that he and his wife had provided investigators with information that would help “establish the truth on the work carried out by Mrs Fillon.”

Such questioning is a normal step in a preliminary probe and not an indication of guilt.

France’s financial prosecutor’s office opened an investigation last week after the satirical weekly Le Canard Enchaine reported that Penelope Fillon had been paid 500,000 euros ($534,000)from state funds as a parliamentary assistant to her husband and his successor, but that it could find no evidence that she had actually done any work.

Fillon has said his wife’s work was real, and that he is the victim of a smear campaign.

He is, however, in an increasingly tight race against centrist Emmanuel Macron and far-right National Front leader Marine Le Pen, according to surveys carried out since Le Canard Enchaine published its story.

The affair has dented the wholesome image that the devout Catholic has cultivated. Analysts have said it could also make it harder for Fillon to stick to a platform of spending cuts and firing of civil servants.

“This is harming him both in his bid to get to the Elysee (presidential palace) and also for his calls for the French to agree to tighten their belts for the sake of the recovery of the French economy,” said Francois Miquet-Marty of the pollster Viavoice.

A privately organised Internet petition asking Penelope Fillon to “give us back the 500,000 euros” had by Monday evening collected 248,000 signatories.

Fillon’s lawyer Antonin Levy said investigators would be sent more evidence in the coming days to prove that Penelope Fillon’s work was real and “very important.”

Asked about what work Penelope Fillon, who had up until now said she was staying out of politics, had been doing, Levy told BFM TV: “Working as a parliamentary assistant is not about writing up notes … and summaries, it is also sometimes less tangible, less concrete but as real.”

“It’s being the person one trusts,” he said.

The probe is at this stage only a preliminary investigation, the first step in the judicial process. Fillon has said he will abandon his presidential bid if he is placed under formal criminal investigation.

If police find that the allegations stand up, prosecutors can seek a formal inquiry by an investigating magistrate, which would take months to reach a conclusion.

However, prosecutors could also leapfrog that step and go directly to trial, the source close to the case said.

Should Fillon drop his presidential bid, time is running out for the conservative Republicans party to choose another candidate.

The party has only about two weeks to organise a new primary as a March 22 deadline approaches for all candidates to officially register for the election, Anne Levade, who oversaw the party’s primary in November, told Le Monde newspaper at the weekend.

A Fimalac spokeswoman declined to comment on the questioning of Ladreit de Lacharriere, and there was no immediate response to an attempt to reach him by email.