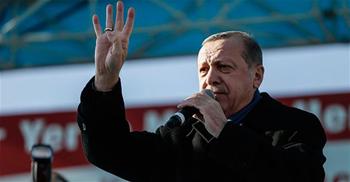 President Recep Tayyip Erdoğan is expected to travel 40 cities across Turkey to hold rallies during the campaign for the upcoming referendum and to “explain what constitutional changes will bring about for Turkey,” sources told daily Hürriyet over the weekend.

The campaign process will begin after Erdoğan approves constitutional amendments to shift Turkey to an executive presidential system and the Supreme Election Board (YSK) announces the timetable for the referendum, which is expected to be held in the first half of April.

Sources say Erdoğan will begin holding rallies inside Turkey in February and plans to visit around 40 cities, including the 30 largest ones that have the status of greater municipalities.

The president is expected to “explain the advantages of the proposed system” and stress “problems stemming from the current parliamentary system,” sources said, adding that Erdoğan will deliver a message based around the theme that “The system is changing, not the regime.”

Sources also said work to finalize Erdoğan’s itinerary are still underway and details, including slogans and other material, will be set soon.

“There is no obstacle to us [holding campaign rallies]. There will be a lot of activities … I am already on the streets. Of course, a process that envisages the future of the [new] presidency will certainly be my concern as the president,” Erdoğan recently told reporters.