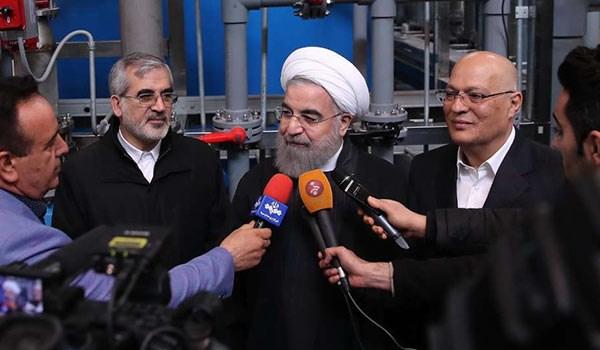 “Today after one year from the JCPOA deal, enrichment has been possible in Iran using the IR8 centrifuges running with a speed of 24 times more than that in the past,” President Rouhani said during his provincial tour of Alborz province on Tuesday.

The Iranian president said that one year after the JCPOA conclusion, Iran has gained good success.

In relevant remarks earlier on Tuesday, Iranian Foreign Ministry Spokesman Bahram Qassemi underlined that any changes to the nuclear agreement signed between Tehran and the six world powers needs the consent of all parties and no single country can scrap the deal.

“The signatories of the Joint Comprehensive Plan of Action (JCPOA) comprising Iran, the US, Russia, China, France, Britain and Germany have no option other than remaining committed to the nuclear agreement,” Qassemi told reporters.

He expressed the hope that the western countries will also remain committed to JCPOA as Iran has done so far.

In relevant remarks earlier on Tuesday, French Foreign Minister Jean-March Ayrault underlined that his country is committed to the implementation of the nuclear agreement signed between Tehran and six world powers.

“Respecting the nuclear deal known as the Joint Comprehensive Plan of Action (JCPOA) is very important to Paris,” Ayrault told reporters in Tehran.

Iran and the world powers signed the nuclear deal, known as the Joint Comprehensive Plan of Action, on July 14, 2015.

During the Iranian president’s historic visit to Paris in January 2016, Iran and France signed a series of basic trade deals thought to be worth billions of dollars.

Rouhani and his French counterpart Francois Hollande oversaw the signing of the deals that concerned cooperation in a range of sectors such as aviation, car manufacturing and oil among others.