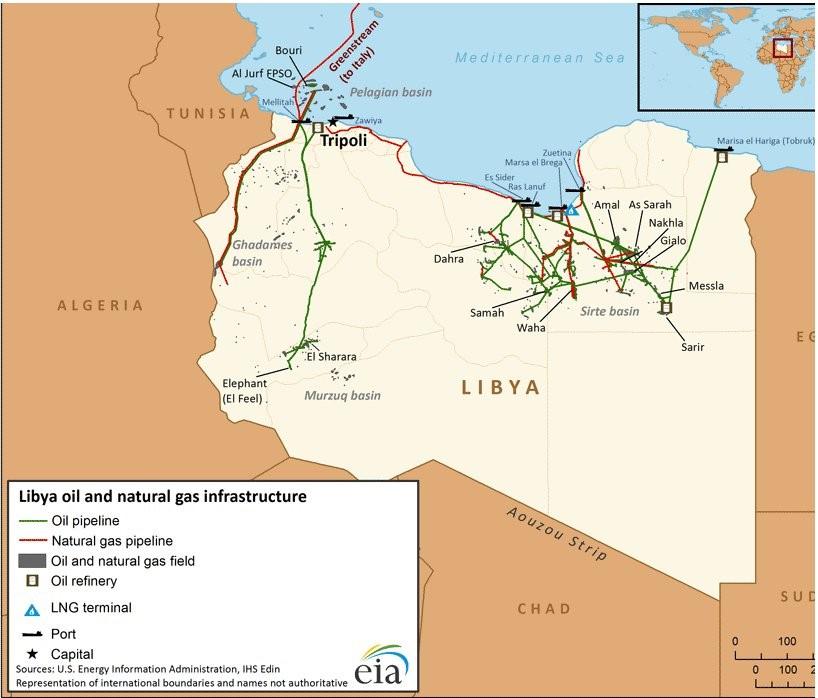 Libya is home to a massive 48 billion barrels of oil—the largest reserves in Africa–and it’s about to open its doors to new foreign investment in oil for the first time in half a decade.

The question now is what’s left to develop, assuming the political instability is subdued?

Prior to the demise of Libyan strongman Muamar Ghaddafi, Libya was among the world’s top ten producers, pumping out about 1.7 million barrels per day.

Today, it’s producing 715,000 barrels a day of oil, after restoring much of the production lost due to political chaos and conflicts. By the end of this year, with blockades on its ports lifted–NOC Chairman Mustafa Sanalla believes the country will be producing 1.25 million barrels a day, closing in the Ghaddafi-era figures.

“Every single major oil-export route is now open, although some are operating at significantly reduced levels due to damage suffered in conflicts,” Sanalla said at a conference in London last week.

It’s no small feat, given that Libya was only pumping out 580,000 barrels per day just in November, according to Bloomberg, and under 200,000 earlier last year.

Who’s (or Who Was) Who in Libyan Oil

Certainly, Sanalla is eyeing BP, which signed a landmark agreement with Ghaddafi in 2007, scooping up assets that were worth over $470 million as of the end of 2013. But for BP it was an exploration game, not yet production, and it shelved its plans in 2014 to explore onshore in the Ghadames basin, near the border between Libya, Algeria and Tunisia, because the security situation was untenable. BP also has offshore assets in the central Sirte basin. The UK-listed company reportedly lost $600 million on Libya, so it’s going to take a lot to lure it back into the fold.

The past half a decade has also seen a number of other big players take action to avoid risk in Libya. In September 2014, Exxon Mobil moved to cut its staff and operations. Before that, in 2012, Shell abandoned exploration wells on two blocks after showing disappointing results. In 2013, Marathon Oil tried to sell off its stake in a Libyan oil venture, but the deal was blocked by the authorities.

In the Spring of 2015, French Total SA was the first to actually take a major impairment in Libya and write off US$755 million in onshore assets. In July that same year, BP followed suit, writing off its assets.

French Total SA, ConocoPhillips, and Italian Eni have been operating in Libya for years, and have continued to operate despite the long-running instability that has hijacked ports and damaged oil infrastructure. But they’ve had some major setbacks.

Eni, at least, started drilling a new offshore exploration well in the first week of January, targeting gas, with exploration expected to last just over two months.
This small lithium company is on the verge of becoming the next big thing in the resource space. With incredible assets and a dream team including mining legend Frank Giustra – this company should be on all investors radar.

But Eni’s El-Feel (Elephant) oilfield is still closed, along with the Sharara field, operated by a JV between the Libyan NOC, Repsol, Total, OMV and Statoil. Together, they have a production capacity of 450,000 barrels per day, with the lion’s share of that coming from Sharara. Sharara re-opened in December, finally, but Elephant is still offline.

This is where the risk picture becomes clearer, even though the blockade on ports has been lifted. The pipeline leading from these two fields has been re-opened. It was shut down in 2015—most recently—because oil guards were blocking it. That hurdle was crossed, but a separate group is still preventing production from restarting at the Elephant field that feeds this pipeline.

Time to Get Exploration & Production Back on Track?

‘We intend in the coming months to lift our self-imposed moratorium since 2011 on foreign investment in new projects to achieve the best national interest for the Libyan oil sector and for Libya as a state,” Sanalla said.

As far as the NOC chairman is concerned, he’s just been waiting for a “legitimate government with a mandate from the people to come to power” before allowing foreign investment again.

He’s says it’s going to be different now, and the plan is to bring new investments in—and entice a return of the old investments, like BP.

This time it will be different, Sanalla said, because Libya’s political factions have agreed that keeping the oil flowing is vital. “We cannot stand back and do nothing while the state disintegrates,” Sanalla said.

According to Sanalla, before the civil war, studies had estimated Libya’s oil industry required investments between US$100 billion and US$120 billion.

Last week, Sanalla was on the Libyan oil campaign trail, hitting up the supermajors to head back ‘home’.

According to Libyan media reports, in London, Sanalla told BP’s head of north African operations, Hesham Mekawi, and Vice-President of Exploration in Africa, Jasper Pejis, that the country’s oil crescent region was now safe and ripe for exploration.

Sanalla also met with big line-up of foreign oil partners while he was in London, including: German oil company DEA, Austria’s OMV, US oil giants Hess and ConocoPhillips and Spain’s Repsol, among others.

At this point, Libya’s oil wealth remains immensely attractive. That said, while those who haven’t written off assets will be relieved that things are finally moving towards normal in terms of production, bringing back the supermajors who have already written off hundreds of millions in assets will be challenging until there is a much stronger indication of government unity and security.

By Damir Kaletovic for Oilprice.com