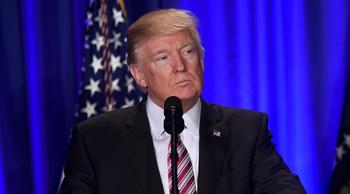 US President Donald Trump’s ban on Muslims and his other anti-Muslim actions show that he represents the same forces that carried out the September 11, 2001 false flag operation to create a clash of civilization against Islam, according to an American author and political commentator.

Dr. Kevin Barrett, the author of Truth Jihad: My Epic Struggle Against the 9/11 Big Lie, made the remarks in an interview with Press TV on Monday after Trump claimed that his executive order banning people from seven Muslim-majority countries “is not about religion.”

Trump signed an executive order on Friday that imposes a 90-day entry ban for citizens of Iran, Iraq, Syria, Yemen, Sudan, Libya and Somalia, blocks refugees from Syria indefinitely, and suspends all refugee admissions for 120 days.

Trump rejected criticism suggesting his executive order amounts to the “Muslim ban” he proposed as a presidential candidate.

“And that’s how he has always phrased it to get support from the Americans who are the most terrorized by this artificial threat of supposed Islamic extremist terror that was created by the false flag operation of September 11, 2001, and has been continuing through many more false flag operations ever since,” added the scholar, who has been studying the events of 9/11 since late 2003.

“So he now is in office and he knows that it’s unconstitutional to ban people based on their religions, “the analyst said.

“So he’d think that he would just drop the whole project and find a much easier path to getting things done – that he might want to get done in other areas – but perhaps he is essentially owned by the criminal syndicate linked to ethnic Jewish Zionists, and people like Bibi Netanyahu are very much at the center of the people setting that agenda, Trump is going ahead and pushing for this Muslim ban,” the academic pointed out.

‘Muslim ban not about terrorism’

“Now that he has announced that it’s not about religion. Well, then what it’s really about then?”  Dr. Barrett asked.

“Certainly it’s not about terrorism because there is no evidence whatsoever that people from these countries have anything to do with terrorism here in the United States,” he stated.

“So this is really a political propaganda ploy that Trump used to get elected,” the commentator said.

“And now that he is in office he seems to be pursuing the strategy of tensions with the enemies of Israel. I think he is representing the same forces that carried out the false flag operation on September 11, 2001, in order to create a clash of civilization against Islam that could be used as a cover for the execution for the Oded Yinon Plan and its later versions to basically destroy and balkanize the Middle Eastern countries in the neighborhood of Israel,” he observed.

“That’s what the 9/11 false flag operation carried out by Israel and its American assets was really all about.  And Trump is very, very close to those Zionist extremists,” pointed out Dr. Barrett, a founding member of the Scientific Panel for the Investigation of 9/11.