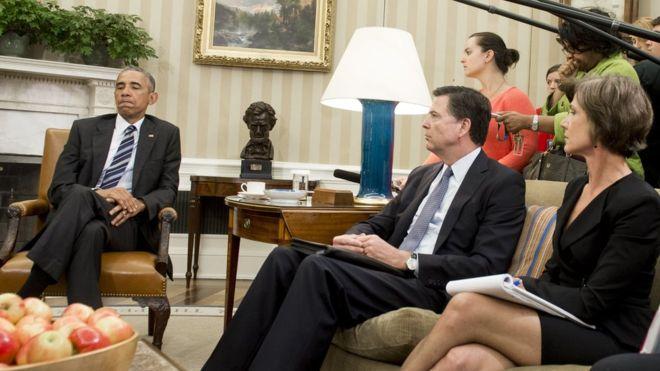 Donald Trump has fired the acting US attorney general, after she questioned the legality of his immigration ban.

Sally Yates, who had been appointed under Barack Obama, earlier ordered justice department lawyers not to enforce the president’s executive order.

In a statement, the White House said Ms Yates had “betrayed” the department.

Dana Boente, US attorney for the Eastern District of Virginia, replaces her as acting attorney general.

Mr Trump’s order temporarily banned nationals from seven Muslim-majority countries from entering the US, and sparked street protests in the US and abroad.

In a letter, Ms Yates had said she was “not convinced” that the president’s order was lawful.

“As long as I am the acting attorney general, the department of justice will not present arguments in defence of the Executive Order,” she said.

She had “betrayed the department of justice by refusing to enforce a legal order designed to protect the citizens of the United States”, a statement from the press secretary said.

It also described her as “weak on borders and very weak on illegal immigration”.

Donald Trump’s critics are calling it the “Monday Night Massacre”. That’s a reference to President Richard Nixon’s Saturday night sacking of his attorney general during the depths of the Watergate scandal of 1973, the last time top justice department officials were forced out by a president.

This time around is a bit different, however. Acting Attorney General Sally Yates essentially forced Mr Trump’s hand when she ordered justice department lawyers not to defend the president’s recent immigration order in court.

Mr Trump could not abide such defiance from an Obama Administration holdover due for replacement soon anyway. Once again, however, his White House team could not help but turn the rhetorical volume up to 11 in announcing the firing, accusing Ms Yates of having “betrayed” the justice department.

Ms Yates’s move follows on the heels of a similar over-the-top reaction to a letter, signed by more than 100 career state department officials, condemning the immigration action as un-American.

It’s easy to imagine that this administration – just over a week in power – feels set against a Washington bureaucracy seeking to undermine it at every turn. If that kind of bunker mentality grows in the days ahead, this political bloodletting likely will be only the beginning.

Her replacement, Mr Boente, was also appointed by Barack Obama, in 2015. He was confirmed by the US Senate – making him eligible for appointment while Mr Trump waits for his own nominee to be approved.

Senator Jeff Sessions is awaiting a confirmation hearing for the role later this week.

Meanwhile, hundreds of diplomats and foreign servants have been drafting a “dissent cable” to formally criticise the president’s executive order.

A draft version of the cable said that immigration restrictions will not make the US safer, are un-American and will send the wrong message to the Muslim world.

The White House has consistently defended Mr Trump’s executive order despite the controversy, with press secretary Sean Spicer saying diplomats should “get with the programme”.

In addition, former President Barack Obama has apparently broken with the convention of former presidents avoiding comment on their successors.

Commenting on the protests about the immigration order, President Obama said he was “heartened”.

“Citizens exercising their constitutional right to assemble, organise and have their voices heard by their elected officials is exactly what we expect to see when American values are at stake,” he said in a statement, which did not mention Mr Trump by name.

Mr Trump also replaced the acting director of the US Immigration and Customs Enforcement, Daniel Ragsdale, who has been in the post since 20 January. He is the former deputy director.

The president appointed Thomas Homan, the executive associate director of enforcement and removal, as the new acting director.

A statement from the department of homeland security announcing the change did not explain the reason for it.