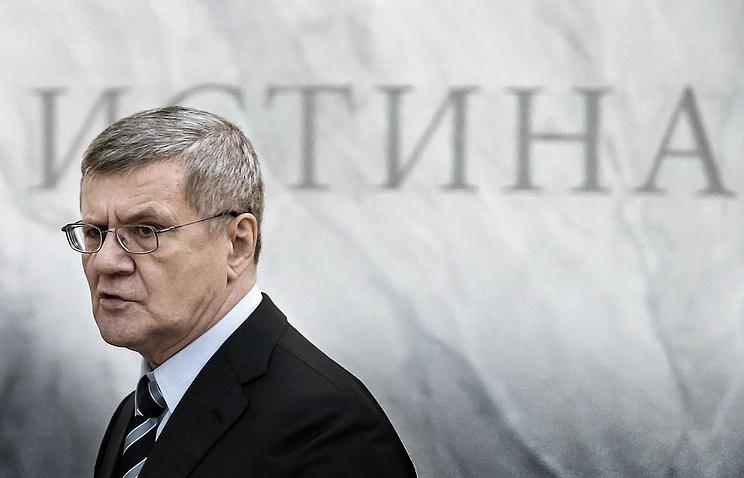 – Mr. Sheriff, I’d like to make a confession. I’ve come here voluntarily, without any subpoenas. I’m standing here in front of you at my own will.

– Honestly speaking, it’s a very long while since I used to be addressed that way.  Quite possibly, the last time that happened was when I served as the Prosecutor of the Irkutsk Region. Or even earlier, when I was investigating the high-profile Tulun prison riot affair. As you may have heard, there had been an insurrection at special penitentiary No. 2. Each day I had to go there for questioning. I recall it was then that I was addressed as “Mr. Sheriff”.

– What kind of case was that?

– Back then it was the hottest topic around. The subject was on everybody’s lips. In 1978, convicted felons at the central penitentiary in Tulun (many mob bosses, including Vyacheslav Ivankov, nicknamed Yaponchik, or Little Japanese) were imprisoned there, rose up in revolt against bad conditions and the administration’s corruption. The penitentiary’s Deputy Chief for Security, Major Vedernikov, was taken hostage. Given this reason, after so many years, I still remember his name. Five men died in the rioting. My team spent six months investigating the case. We had to conduct an in-depth inquiry – into legal violations by prison officials and into who was responsible for the killings. The bodies bore more than a hundred wounds. As the victims were dragged along the corridors, everybody was free to join in on the carnage: punch, kick, cut with sharpened pieces of metal, and break bones… This brutal punishment was used against those who opposed the revival of the mob world’s unwritten code of conduct.

It was a really hard case to investigate. At the request of the defendants’ lawyers I was questioned by a district court for two and a half hours.

– Everybody was sincerely surprised and could not believe we had managed to prove what in our legal jargon is known “cause-and-effect connection” between the wounds and the death and persuaded the accused to confess. All of the Tulun convicts were hardened criminals. Each of them was a tough nut to crack. It was really difficult to “make them sing.” When the defendants realized that they were fighting a losing battle, they followed their lawyers’ advice to come up with all sorts of preposterous depositions. For instance, we had been accused of offering them drugs in exchange for a confession. A complaint was dispatched to Moscow to the Communist Party’s main disciplinary watchdog. Demands were made to hold us accountable for abusing the Communist’s code of conduct. Sheer nonsense! Yet the whole team of investigators had to face a court interrogation. It did not help. Nine convicts were handed long prison terms…

– Did you have to appear in court often in the capacity of state prosecutor?

– Why, naturally I did. When I held a position at an interregional prosecutor’s office. I was an investigator for a while. I think I did a good job then. Back in the 1970s, I managed to halt the prosecution of several cases involving necessary self-defense. Such precedents were extremely rare then! The cases were scrutinized even by the USSR Prosecutor-General’s Office. Heated debates on this subject are still raging today. In the meantime, yours truly used that article in practice in a remote province, the Ust Uda district. The local people there were all tough guys – convicts serving penal labor terms at hazardous factories, lumberjacks, pine resin collectors and the like. All of them were men of honor and never broke a promise. In a word, it’s a long while since I participated in court proceedings personally.

– Some of your predecessors seldom missed a chance to appear in public in such capacity. Take Andrey Vyshinsky, for instance.

– Those were very different days. Any comparison would be wrong. Many trials were fast-tracked. It took hours to pass a sentence. Confession was regarded as “the Queen of Evidence”, as Vishinsky used to say. We all know in what way those confessions were often obtained and what their real worth was.

These days there is no need for the Prosecutor-General to participate in court hearings personally. Many cases consist of quite a few sub-cases – episodes we call them. Hearings may last many months. Neck-deep involvement in criminal proceedings will leave no chance for doing day-to-day work. Many current affairs would have to be shifted onto the shoulders of my deputies. I do not think this will be right.

I’m not a guest star. I cannot afford to stand up and read out what my subordinates who have in-depth knowledge of the case have written for me. Should I start doing so, I’d stop respecting myself.

I have to delve into the details to sort things out myself. Only then will I have the right to voice an opinion.

Earlier today I was briefed on another case two of my deputies are in charge of. I like the investigator’s job. Let me say once again: back in the 1970s I started my career as an investigator. I also led the investigation department at the office of the East Siberian transport prosecutor, I was in charge of the investigation division of a regional prosecutor’s office. I have first-hand understanding on the ins and outs of that job from the inside, at the grass-roots level, but I have to confess that my current position leaves no chance of focusing on something in particular. It would be a waste of time and energy and a strategic mistake on my part, for I’m keen to use my working hours most effectively.

– What is your attitude to out-of-court settlements and plea bargaining?

– There’s a widespread belief that fast-track legal proceedings save time.

– They do, but if you want to know my personal opinion, I’m strongly opposed to such deals. They generate inequality. The one who agrees to such a bargain may falsely accuse other defendants and get off with a lighter sentence, while everybody else will be convicted and handed the harshest sentence possible.

– Have there been any acquittals in your professional career?

– None, if you are asking me about the cases I investigated myself. A couple of cases were reinvestigated on some minor grounds, but not a single defendant was set free in the courtroom.

– Having served over 40 years, what do you think has changed in the system?

– In all fairness, I must say that I was a career Communist Party functionary for sometime. Also, I was Russia’s Justice Minister, but it is true that most of the years of my legal career were in various jobs with the prosecution system. Getting a prosecutor’s job in the 1970s was hard, in fact incredibly difficult. Only the very best were selected. The specialists were trained mostly at three law schools – in Sverdlovsk, Kharkov and Saratov. I graduated from the institute in Sverdlovsk, in the Urals.

The changes over the past four decades were colossal. The fundamental, basic principles and commitment to law remain the same, while many other aspects have changed

The changes over the past four decades were colossal. The fundamental, basic principles and commitment to law remain the same, while many other aspects have changed. For instance, back then there were no business people in the modern sense of the word. We had only black market profiteers and shadow economy manufacturers of substandard products operating underground. All faced criminal charges. These days we work in close contact with the business community and do our outmost to protect it from illegal interference. There has emerged a robust civil and arbitration legislation structure. Over the past ten years the special network of prosecutors’ offices supervising transport has been re-created. Special units have been set up to fight corruption, extremism, terrorism and boost law and order in inter-ethnic relations.

I’d particularly like to say a couple of words about the struggle against corruption. In January 2013, prosecutors were given new powers in that sphere and they have now used them to the fullest extent. We have initiated more than 600 litigation cases to control civil servants’ spending. More than thirty lawsuits demanding conversion of concealed assets to state property were sent to the courts. Courts have already sustained twelve lawsuits more than a hundred million ruble worth that had been filed by prosecutors.

– Do you think this is much? In contrast to the nine billion rubles seized from Police Colonel Dmitry Zakharchenko…

– Let me finish first! I’m drawing no parallels, I’m briefing you on the facts and figures related to our work. Over the past two years the investigators have confiscated 11.8 billion rubles worth of properties, cash and valuables and carried out asset confiscations worth another 62.3 billion rubles.

Furthermore, over the past three years prosecutors used article 19.28 of the Code of Administrative Offenses (Illegal Reward on behalf of a Legal Entity) to hold more than 1,000 legal entities liable. The courts have levied fines totaling 1.5 million rubles. In 2016, inspections by prosecutors resulted in the dismissal of 380 civil servants (mostly at the municipal level) over loss of confidence. All of them were proven guilty of corruption. More than 300 cases of violations of anti-corruption legislation were exposed last year. At prosecutors’ demands nearly 70,000 officials were disciplined and investigative authorities launched more than 3,700 criminal proceedings. A total of 13,183 culprits were convicted on corruption charges last year.

– I’ve never had any ambitions like that. I’ve always been for creating an integral investigative committee as an independent body, but at the same time I always said that it is extremely important to maintain a balance of powers. In any civilized country the prosecutor either investigates a criminal case himself or oversees the investigation process. This is very logical. It is the prosecutor who on behalf of the state performs the function of prosecuting the criminal charges. It is not normal to have a situation in which somebody else conducts the investigation work, while the prosecutor is barred from the process and eventually faces an accomplished fact: here is the collected evidence, your job is to go to court and support the charges. That’s wrong. In the meantime, this is precisely the way it is.

– We’ve had it this way since 2007, when the Investigative Committee was separated from the Prosecutor-General’s Office.

– Does it make any difference? We hadn’t had any procedural powers before, either. We can join legal proceedings only at the very beginning, when a criminal case is opened. The prosecutor’s office has just twenty four yours to overturn the decision or to accept it. And then we step in at the very end, when we receive the case together with the bill of indictment. Let me say this again, we are barred from the investigation process. The balance of powers must be restored and the investigation made an integral process again.

– Does this apply to the Interior Ministry and the Federal Security Service (FSB)?

– Regarding the security service an exception may be made. It deals with cases of special importance to the state and the requirements there are very special, too. As for the Interior Ministry’s investigative bodies, they should be merged with the Investigative Committee to become one agency.