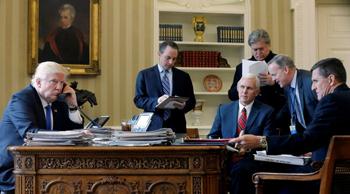 Mr. Bannon, the former CEO of the conservative populist Breitbart News, was already a pivotal White House player on domestic and political matters. Now his portfolio is even wider, encompassing national security – including the controversial order to temporarily bar citizens of seven mostly Muslim countries from entering the United States. Bannon reportedly played a key role in shaping the measure.

Trump’s move on the NSC gave Bannon a formal seat on its “principals committee,” the top interagency group on national security. It also limited attendance by the chairman of the Joint Chiefs of Staff and director of national intelligence only to certain meetings, when “issues pertaining to their responsibilities and expertise are to be discussed,” according to the presidential memorandum issued Saturday.

To some observers, like former Obama CIA and Pentagon chief Robert Gates, it’s the latter part that is upsetting, not Bannon’s elevation. Indeed, presidents enjoy wide latitude in who they bring in as advisers, and in how they are deployed. History shows that past presidents have had close advisers whose portfolios range far and wide.

“For the political guys to move in and then be at the arm of the president on both domestic and foreign policy is actually more common than you’d think,” says presidential historian David Pietrusza.

The best historical analogy may be Edward Mandell House, a diplomat, politician, and close adviser to President Woodrow Wilson. “Colonel House,” as he was known, despite his lack of military experience, advised President Wilson both politically and on foreign affairs.

“He was the prototypical shadowy guy who never had an official position, but who would be sent off to Europe to negotiate with the crowned and uncrowned heads to make peace,” says Mr. Pietrusza.

Under President Franklin Roosevelt, two top advisers – Louis McHenry Howe and Harry Hopkins – were so close to the president that they took up residence at the White House. Mr. Hopkins’s brief spanned the top issues of a momentous presidency, both as an architect of the New Deal and as President Roosevelt’s chief diplomatic adviser during World War II.

Then there’s President John F. Kennedy, whose brother Robert F. Kennedy was a close adviser – and his attorney general. It was the latter appointment that triggered an anti-nepotism law that, 50 years later, Trump had to satisfy in making his son-in-law, Jared Kushner, a top White House adviser.

To suggest that Bannon enjoys unprecedented power as a White House adviser might be Trumpian in its hyperbole. Trump clearly appreciates Bannon’s counsel, and trusts him. But for now, no one appears closer to Trump as an adviser than Mr. Kushner, the husband of Trump’s daughter Ivanka.

The headlines around Bannon’s elevation to the NSC may be triggered in part by his politics. Where Kushner is all about loyalty to his father-in-law, Bannon is defined by the ideology that has caught Trump’s eye and brought him to the Oval Office.

As chairman of Breitbart, Bannon presided over a site that catered to the so-called “alt-right,” and its nationalist, populist, at-times racist and misogynist views. (In his career, Bannon has also been a Navy officer, an investment banker, and a Hollywood producer.) Now, among his many roles as a close aide to Trump, Bannon has also become one of the administration’s fiercest media critics.

“The media should be embarrassed and humiliated and keep its mouth shut and just listen for a while,” Bannon told The New York Times in an interview last week.

Bannon’s harsh words certainly don’t endear him to the Washington press corps. But it’s his wide policy berth and penchant for dramatic displays of power – such as the shock-and-awe start to the Trump presidency that he helped orchestrate – that have made him a force, and caused such alarm.

To bolster their case that Bannon’s new perch on the NSC is inappropriate, some observers point to the example of the last Republican president, George W. Bush.

“That is not true,” Mr. Axelrod replied in a CNN column. In 2009, he writes, as a senior adviser to Mr. Obama, he watched the NSC Principals Committee debate strategy over the war with Al Qaeda. But “I was not a member of the committee. I did not speak or participate.”