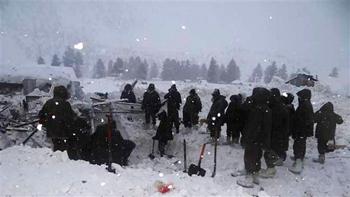 The death toll from a series of avalanches which struck Indian-administered Kashmir has climbed to 25, military sources say.

The Indian military said Monday that five soldiers pulled alive from beneath heavy snow had died of their injuries.

The seriously injured troops were rescued Saturday after a day-long mission along the fortified Line of Control (LoC), the de facto border that divides Kashmir between India and Pakistan.

Sources said the soldiers had been approaching a border post along the LoC when their snow track caved in.

Last Wednesday, at least 15 Indian troops died when a patrol and two camps were hit by an avalanche in the north of the Himalayan region. It took rescue workers two days to retrieve their bodies from under tons of snow.

At least five civilians, four from a single family, died after their houses were hit by a separate avalanche in the region.

Indian-administered Kashmir has been witnessing one of the most severe winters in recent decades. It has been experiencing heavy snow across the territory and temperatures dropping to minus seven degrees Celsius.

Authorities have warned of the possibility of more avalanches and advised residents in mountainous areas not to venture out.

Dozens of Indian and Pakistani troops are killed by avalanches almost every winter along the LoC.