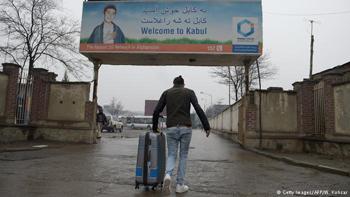 A rejected Afghan asylum seeker who returned to Afghanistan last year may have another chance to join his family in Germany, but not all deportees to the war-torn nation enjoy the same kind of support that he has.

Afghan asylum seeker Ahmad Shakib Pouya was considered as an example for successful integration into German society. During his six-year stay in Germany, the Afghan singer learned good German, became part of art projects as a stage actor and was offered paid jobs.  But after his asylum application was rejected, the artist had to willingly return to Afghanistan, in order to avoid deportation and keep alive hopes of getting another chance to come to Germany.

According to German law, a deportee will not be granted visa for at least three years. Pouya did not want this to happen to him because he hoped to be able to join his German wife and finish his art projects.

Pouya applied for asylum in Germany in 2011 because, in Afghanistan, he was under threat from the Taliban – armed opponents of the Afghan government – due to his work with foreign aid workers. It had taken him two years to get to Germany where he wished to start a new life.

After arriving in Germany, the artist became part of art projects as a stage actor, singer and performer. He learned German and even worked as a translator helping other Afghan refugees and asylum seekers and was offered paid work. But things took a wrong turn for the young Afghan in 2016.

“My application for asylum was rejected in Germany,” he told DW from Afghanistan where he now lives. Pouya’s documents state that he was one of the few Afghans who returned to their home country willingly but he stresses that it was never his own choice to leave.

“Afghanistan is a very dangerous place for me because of my art and political views. But I had to leave and come here,” he said, adding that he only left so that he could come back, join his family and finish his art projects.

Pouya’s return to Afghanistan prompted his colleagues to lash out at the German government’s policy, and they demanded that he be granted permission to stay in the European country. While they staged protests in Germany, one of them even visited Kabul to help Pouya get a German visa.

The outpouring of support from his colleagues and some activists seems to have helped further Pouya’s application for a German visa. He will soon visit the German embassy in Kabul to discuss his situation with the authorities. The once-rejected asylum seeker remains hopeful that he will be able to get the visa.

Others have to stay

But not everyone who has been deported from Germany or has returned to Afghanistan voluntarily enjoys the same kind of support that Pouya has, as the story of Muhsin Amir reveals.

Amir – who was separated from his family and deported to Afghanistan on December 15, 2016 – says he has not received any help since his return to Afghanistan. Amir was part of the first group of deportees out of a proposed 12,000 that are to be sent back to Afghanistan under a recent agreement between the German and Afghan governments.

Amir entered Germany “legally” from Greece in 2013 within the framework of family reunification. His mother and siblings are legal residents in Germany. He was 19 when he arrived in Germany and until his deportation the young Afghan lived with his family in the northern German city of Hamburg.

Amir is now based in Afghanistan’s western Herat province, which Germany considers one of the many safe zones in the conflict-afflicted country. But he claims his life has been under constant threat since he returned.

“I cannot leave my home at night. There are incidents in places that the German government considers safe zones in the country,” he told DW.

Still, Germany appears to remain steadfast in its efforts to send rejected Afghan asylum seekers back to their home country. In fact, authorities have even deported at least one member of the Afghan-Hindu minority, a community that claims to be facing religious persecution in the conservative, Muslim-majority nation.

To protest against Berlin’s policy, hundreds of Afghan Hindus and Sikhs took to the streets in the western German city of Cologne on January 28 and called on the government to put an end to deportations, particularly of Hindus and Sikhs. “We are from a religious minority and face prosecution and should not be deported,” one protestor told DW.

While the German government seems convinced that it can send back rejected Afghan asylum seekers to safe zones like the western Herat and northern Balkh provinces, many deported Afghans like Amir say they will take the risk all over again to return to Germany. “I cannot stay in Afghanistan. I will continue to make efforts to join my family in Germany,” he said.