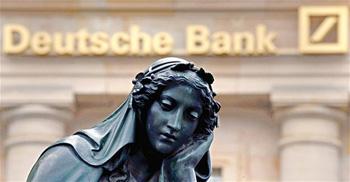 Deutsche Bank has agreed to pay $630 million in fines for organizing $10 billion in sham trades that could have been used to launder money out of Russia, the latest in a string of penalties that have hammered the German lender’s finances.

In two detailed reports, U.S. and British regulators criticized the bank for not knowing the customers involved or the source of money for the trades, which helped buoy revenue during a slowdown following the global financial crash.

The scheme involved so-called mirror trades carried out between 2011 to 2015 – for instance, buying Russian stocks in rubles for a client and selling the identical value of a security for U.S. dollars for a related customer.

The New York Department of Financial Services outlined a web of trades “converting rubles into dollars through security trades that had no economic purpose” and stretched from Moscow, London and New York to Cyprus and the British Virgin Islands.

“I have a billion ruble today … will you be able to find a security for this size,” the watchdog cited one party to a deal as telling a Deutsche Bank trader in Moscow.

The regulator said the bank had missed numerous opportunities to prevent the scheme. “These flaws allowed a corrupt group of bank traders and offshore entities to improperly and covertly transfer more than $10 billion out of Russia.”

It said the scheme – in which the parties involved often lost money on the trades due to fees and commissions – could have been used for money laundering.

While U.S. and British regulators – which fined Deutsche $425 million and $204 million respectively – penalized the bank for not having adequate controls, they did not say top management was aware of the improper nature of the trades.

The fines – which comes weeks after a $7.2 billion U.S. penalty for the sale of toxic mortgage debt – marks another step in Deutsche Chief Executive John Cryan’s attempts to draw a line under the bank’s misdeeds in the wake of the financial crisis, as it sought to carve and then keep a foothold on Wall Street.

That has left a costly legacy of billions of euros of fines. Germany’s biggest bank is expected by analysts to report a loss later this week for 2016 of more than 650 million euros.

Karl von Rohr, Deutsche Bank’s chief administrative officer, said the bank regretted its role in the Russian trades scheme and that it had since acted to address shortcomings.

He cautioned, however, that other authorities were investigating the trades and that the matter was not yet closed.

The U.S. Department of Justice is not part of the deal and is still looking into the trades. A spokesman declined to comment on its inquiry.

Among a host of legal claims, two large cases remain: an inquiry into alleged foreign exchange manipulation and an investigation of its processing of some dollar payments in countries under U.S. embargo.

The British fine, from the Financial Conduct Authority, is the largest financial penalty for anti-money-laundering controls failings yet imposed by the regulator.

In a damning report, it said Deutsche had failed to have proper controls to stop customers transferring billions from Russia to offshore bank accounts “in a manner that is highly suggestive of financial crime”.

It said Deutsche had been unable to determine who many of its customers were, citing missing identification documents, lack of information about corporate ownership and poorly understood foreign-language paperwork.

The U.S. regulator found Deutsche Bank’s Moscow traders facilitated the scheme, with most of the trades placed by a single trader representing both sides of the transaction.

Traders did not question the suspicious trades because it made for easy commissions, it said.