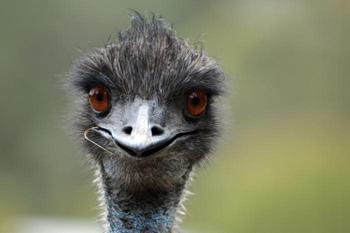 Emu oil has become popular recently due to health claims surrounding its uses and benefits.

Before using emu oil, it is important to understand what it is used for and what possible health benefits it has. It is also important to learn about the possible risks and side effects of using the oil.

What is emu oil?

An emu is a flightless bird, scientifically named Dromaius novaehallandiae. The bird is native to Australia, but is now found in many countries because of a rising popularity of nutritious emu meat and medicinal emu oil.

Emu oil itself is a bright yellow liquid, made up of mostly fat, which is collected from the deposits below the skin of the bird. Once the fats are collected, they are passed through various filters and processes until pure oil is produced. It is a widely available commercial product with some unique benefits.

There are also different types of emu oil, based on different levels of filtration and processing. Most emu oils will go through full processing in order to reduce bacteria and contaminants. Some emu oils are refined more than others in order to create higher contents of fatty acids.

Organizations such as the American Emu Association have certification programs that aim to ensure that the emu oil people buy is pure, and that the emus enjoyed the best possible lives. Completely pure emu oil will always be fully refined and is the type of emu oil studied for its beneficial effects.

The use of emu oil originates from the Australian Aborigine culture. According to their oral history, emu oil has been used for over 40,000 years. The oil has been used to relieve minor aches and pains, help wounds heal quicker, and protect skin from the elements.

The Aborigines first introduced emu oil into European culture as a natural sunscreen and moisturizer. European settlers soon adopted the use of emu oil and many other natural remedies that the Aborigines provided. Since then, people have discovered many more benefits to emu oil.

Emu oil is also popular with massage therapists, who use it to help treat people with arthritis.

The skin easily absorbs emu oil. This can help lock in skin moisture, making the skin less prone to cracking or drying out. Emu oil is often suggested for the dry skin associated withcancer radiation.

It appears that emu oil can pass this absorbable trait on to other compounds when they are mixed together. This property may explain why emu oil is regularly mixed into moisturizers containing other helpful compounds.

The research also signals that applying emu oil to the skin may help increase the number of healthy skin cells. Emu oil stimulates the skin to reduce the appearance of skin wrinkles, and rejuvenate aging or sun-damaged skin.

Emu oil has also been recommended for use in the treatment of skin conditions like alopecia, rosacea, hypopigmentation, shingles, and dermatitis.

Because of its painkilling effect, antioxidant levels, and ability to reach deep into the skin, emu oil is great to apply on small wounds, cuts, bruises, or burns. It can help ease the pain of minor wounds, and the antioxidants may help protect the skin from additional damage.

Applying emu oil to the skin before heading outdoors can actually help repel insects. This is partly due to substances called terpenes found in the oil. Many insects are disoriented or repelled by terpenes, and putting the oil on exposed skin is a great way to keep bugs at bay.

When taken orally, emu oil may actually reduce cholesterol in the body. Researchers found that when compared to olive oil, subjects who were fed emu oil had significantly reduced cholesterol levels. More trials are needed to substantiate these claims, but the results are promising.

According to some research posted to Pharmacy Today, emu oil may also help treat ulcers.

In people who had ulcers, applications of various levels of emu oil had a protective effect. In some cases, the oil even reduced the size of the ulcers.

According to a peer review posted to Nutrition, emu oil may also reduce the breast sensitivity common in breastfeeding mothers.

When newborns latch onto the breast, some women may experience pain caused by an improper latch. This can result in soreness, engorgement, cracked and dry skin, and pain. These symptoms may be severe enough to cause some new mothers to stop breastfeeding.

Researchers found that when breastfeeding mothers used an emu-based cream for a 24-hour period beginning soon after delivery, the breast areola and nipple skin was more hydrated.

Before feeding her baby, a woman should wipe her nipple and breast with a warm cloth to remove any residual oil. This is because emu oil has not been proven safe for infants and children to ingest.

How does emu oil work?

While many topical creams claim to be effective for dry skin, arthritis, and inflammation, most creams and lotions are made up of large particles that cannot penetrate the skin. However, emu oil is made up of smaller particles, which allows it to carry many healthful compounds to deep layers of the skin.

Side effects, risks, and considerations

Emu oil is a natural product and there are few documented side effects. Some people may experience skin irritation when applying emu oil directly to the skin as a topical ointment. To prevent this, a person should apply a small amount of emu oil to a small patch of skin, such as the back of one hand. If an allergic reaction occurs, they should stop using the oil.

It may also be important to consider the source of the emu oil. Emus thrive when they have plenty of room to roam and are able to eat a rich diet. Low-quality living conditions may result in inferior quality oil. It is best to buy oil from a reputable source, especially as the United States Food and Drug Administration (FDA) do not regulate its production.

Women who are pregnant or breastfeeding should talk to their doctor before taking emu oil by mouth. It is important to consult a doctor about the possible uses of emu oil and if it will affect a pregnancy.