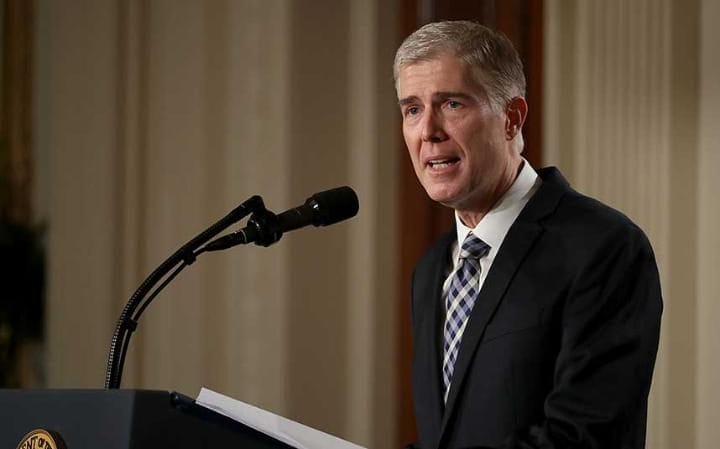 Donald Trump on Tuesday night nominated Neil Gorsuch, a federal judge from Colorado, to fill the vacancy on the US Supreme Court.

If confirmed by the senate, Mr Gorsuch at 49 years of age will be the youngest justice to join America’s highest court since William Rehnquist in 1971.

Mr Trump said he had found “the very best judge in the country” in Mr Gorsuch, calling his nominee’s credentials “as good as it gets”.

Mr Gorsuch currently serves as a judge on the 10th US Circuit Court of Appeals in Denver, the city where he was born. He was appointed to that post in 2006 by Republican president George W Bush.

He has a reputation as a brilliant writer of legal opinions, and has followed the well worn path from Harvard Law school, graduating the same year as Barack Obama, to the federal bench.

Mr Gorsuch attended Columbia University as an undergraduate, and received his doctorate in legal philosophy as a Marshall Scholar at Oxford University.

Mr Gorsuch’s mother, Anne Burford, was the first woman to head the Environmental Protection Agency, serving during the Reagan administration.

Unlike some of the other candidates vetted by Mr Trump, Mr Gorsuch has not held political office and as a result his views are less well established on some key issues.

Th Indiana judge, who is white, adds little diversity to the court compared with the justices appointed by Mr Obama, both of whom were women, one becoming the first Latina justice.

He does offers geographical diversity to a court dominated by justices from the east and west coasts. As an Episcopalian, he would be the only Protestant on the court, which has three Jewish justices and five Catholics.

He is revered by conservatives, though, and ruled in favour of religious liberty arguments in two high profile cases dealing with access to contraception. He has also been highly critical of liberals for turning to the courts rather than the legislature to forward their social agendas on issues like gay marriage and assisted suicide.

There are many parallels between Mr Gorsuch and the main whose seat he hopes to fill, the late Antonin Scalia.

Both subscribe to originalist interpretations of the constitution, meaning they view the document as stable and not subject to reinterpretation as society changes.

Mr Gorsuch described Scalia as a “lion of the law” in accepting Mr Trump’s nomination.

He is well respected by his colleagues in the judiciary and does not share Scalia’s fiery temperament.

Mr Gorsuch’s wife Louise joined him at the White House for the nomination ceremony. They have two teenage daughters.

He said he was “acutely aware of my imperfections”, and pledged to follow the law rather than his own political beliefs if confirmed to the court.

“A judge who reaches every outcome he wishes is likely a very bad judge,” he said.

His nomination met with immediate resistance from Democrats. Nancy Pelosi, the House minority leader, said he held “hostile views” and was “outside the mainstream”.

Mr Gorsuch has been nominated to be elevated to America’s highest court.

His relative youth made him a particularly intriguing selection for Mr Trump, as he could well serve for decades. If confirmed, he would be the youngest justice to join the court since William Rehnquist in 1971.

A Harvard Law School alumnus with a doctorate in legal philosophy from Oxford, he clerked for two Supreme Court justices and is considered a gifted writer of legal opinions.

Mr Gorsuch is an avowed originalist, meaning he believes the Constitution is a stable rather than living document, and has sided with Christian groups in religious freedom cases.