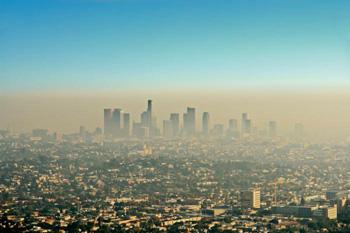 New research strengthens the previously reported link between air pollution and cognitive decline, after finding that exposure to fine particulate matter could significantly raise the risk of developing Alzheimer’s disease and other dementias.

The research found that exposure to high levels of particulate matter 2.5 (PM2.5) – tiny air pollution particles that are up to 2.5 micrometers in diameter – increased older women’s risk of dementia by over 90 percent, compared with low PM2.5 exposure.

Senior study author Prof. Caleb Finch, of the Leonard Davis School of Gerontology at the University of Southern California (USC), and colleagues say that if their findings apply to the general population, then PM2.5 could account for around a fifth of dementia cases.

The researchers recently reported their findings in the journal Translational Psychiatry.

PM2.5 are fine particles consisting of solids and liquid droplets that are emitted from sources involving combustion, such as power plants and motor vehicles.

PM2.5 are 2.5 micrometers in diameter or smaller. To put their size into perspective, the diameter of a PM2.5 particle is around 30 times smaller than that of a human hair.

Because they are so small, PM2.5 are easily inhaled, which can pose numerous problems for health. According to the United States Environmental Protection Agency (EPA),exposure to fine air particles can increase the risk of heart attacks, asthma, and reduced lung function, as well as premature death for individuals with heart or lung disease.

In recent years, studies have suggested that exposure to such pollution may also raise the risk of dementia.

Prof. Finch and team decided to investigate this association further in their new study.

The researchers arrived at their findings by analyzing the data of 3,647 women from 48 U.S. states who were part of the Women’s Health Initiative Memory Study (WHIMS).

All women were aged between 65 and 79 and were free of dementia upon study enrollment. As part of the WHIMS, participants’ cognitive function was assessed annually.

Using data from the EPA, the team estimated the women’s daily PM2.5 exposure at their place of residence.

Compared with women who lived in areas exposed to low PM2.5 levels, those who resided in areas with high PM2.5 levels – defined as levels that that exceeded the EPA’s permissible limit in 2012 (35 micrograms per cubic meter of air) – were found to be at an 81 percent greater risk of global cognitive decline and have a 92 percent increased risk of developing Alzheimer’s disease and other dementias.

The results remained after accounting for numerous confounding factors, including race and ethnicity, socioeconomic status, lifestyle, and the presence of other medical conditions.

The researchers estimated that if their findings ring true among the general population, then exposure to high PM2.5 levels could contribute to approximately 21 percent of dementia cases.

Interestingly, the increased risks of global cognitive decline and dementia as a result of high PM2.5 exposure were strongest among women who possessed the APOE ε4 gene, which is associated with the development of Alzheimer’s.

With this in mind, the team conducted mouse experiments in order to investigate how PM2.5 exposure affects the brain in the presence of APOE ε4.

Using cutting-edge particle concentrators, the researchers exposed two groups of female mice to nano-sized air pollution for 15 weeks. One group possessed the APOE ε4 gene and one did not.

Study co-author Constantinos Sioutas, of the USC Viterbi School of Engineering, explains that the particle concentrators “essentially take the air of a typical urban area and convert it to the air of a freeway or a heavily polluted city like Beijing.”

“We then use these samples to test exposure and assess adverse neurodevelopmental or neurodegenerative health effects,” he adds.

Compared with mice without the APOE ε4 gene, those that possessed the gene were found to accumulate around 60 percent more beta-amyloid plaque in their brains. Plaques are clusters of beta-amyloid protein, which are believed to destroy neurons.

According to the researchers, their findings provide “clear evidence” that fine particle air pollution is related to dementia risk, and they provide the first evidence that exposure to these particles can exacerbate beta-amyloid accumulation.

The association between PM2.5 exposure and increased dementia risk suggests that the global burden of disease attributable to PM2.5 pollution has been underestimated, especially in regions with large populations exposed to high ambient PM2.5.”

The team plans to conduct further studies that will assess how high PM2.5 exposure influences cognitive function in both men and women.