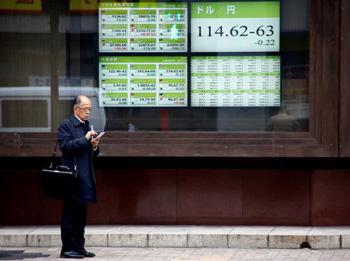 Asian shares touched four-month highs while the dollar sagged on Thursday after the U.S. Federal Reserve stuck to its mildly upbeat economic view but gave no hint of accelerating rate hikes.

While strong economic data from the United States and elsewhere has underpinned risk assets, uncertainty and concerns over U.S. President Donald Trump’s policies have put global markets on edge.

“With many of his cabinet members still not approved, including (incoming Treasury Secretary Steven) Mnuchin, Trump’s occasional remarks and tweets are the only guidance markets can get from the new U.S. administration at the moment,” said Shuji Shirota, head of macro strategy group in Tokyo at HSBC.

“For the time being, markets will continue to be driven by what Trump will say. It’s Trump-on, Trump-off, rather than risk-on, risk-off,” he added.

MSCI’s broadest index of Asia-Pacific shares outside Japan was up 0.15 percent after touching its highest level since mid-October, with Seoul shares reaching highs last seen in July 2015.

But gains were not broad-based, with Hong Kong’s Hang Seng slipping 0.6 percent and Singapore down 0.8 percent.

While painting a relatively upbeat picture of the U.S. economy, the Fed gave no firm signal on the timing of its next rate move with the economic impact of Trump’s policies yet to be seen.

Nor was there any hint on whether it plans to trim its $4.5 trillion balance sheet, an increasingly hot topic among the Fed’s policy circle.

Following the Fed, the 10-year U.S. Treasury yield stepped back to 2.460 percent from Wednesday’s high of 2.518 percent.

“We’ve been expecting the Fed’s next rate hike to come in June and there was nothing from the Fed indicating a hike in March,” said HSBC’s Shirota.

That dented the dollar, which had bounced earlier on upbeat Institute for Supply Management’s (ISM) index of manufacturers and ADP National Employment Report data.

The euro stood at $1.0784, having bounced back from Wednesday’s low of $1.0730. The common currency edged back toward $1.08125, an eight-week high set on Tuesday after Trump’s top trade adviser said that Germany is benefiting from a “grossly undervalued” euro.

Trump also lashed out at Japan and China earlier this week, saying they are engaged in currency devaluation.

Sterling hit a 1 1/2-month high of $1.2680 on Wednesday as solid UK economic data and greater political certainty over the Brexit process encouraged a trimming of big financial bets against the currency.

The Bank of England, due to issue its inflation report later in the day, is expected to stick to a neutral policy stance.

The Australian dollar jumped to a near three-month peak of $0.7648 after news Australia posted its biggest trade surplus on record in December.

In commodities, crude oil eased after news of a sharp rise in U.S. crude and gasoline stockpiles.