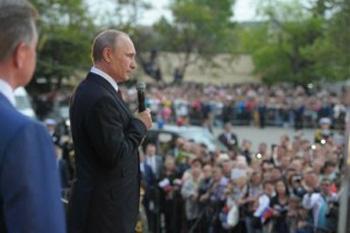 Exclusive: As national Democratic leaders continue to blame Russian President Putin for their 2016 defeat, they’re leading their party into a realignment with the neocons and other war hawks, reports Robert Parry.

The Washington establishment’s hysteria over its favorite new “group think” – that Russian President Vladimir Putin put Donald Trump in the White House – could set the stage for the Democratic Party rebranding itself as America’s “war party” alongside the neoconservative wing of the Republican Party.

This political realignment – with the Democrats becoming the party of foreign interventionism and the Trump-led Republicans a more inwardly looking America First party – could be significant for the future. However, in another way, what we’re seeing is not new. It is a replay of other “group thinks” in which some foreign leader is demonized beyond all reason allowing any accusation to be lodged against him with virtually no pushback from anyone interested in maintaining a U.S. mainstream career.

We saw this pattern, for instance, in the run-up to the Iraq War when Saddam Hussein was demonized to such a degree that any accusation against him was accepted without question, such as him hiding WMDs and colluding with Al Qaeda. In that context, some individuals supposedly with “first-hand knowledge” – “Iraqi defectors” – showed up to elaborate on and personalize the anti-Saddam propaganda message. We learned only later that many were scripted by the U.S.-government-funded Iraqi National Congress.

Since 2011, we saw the same demonization treatment applied to Syrian President Bashar al-Assad who was depicted as a ruthless monster opposed by a “moderate opposition” which, in turn, was embraced by “human rights” groups, touted by Western media and applauded even by citizen “peace groups” around the United States and Europe. The Assad demonization obscured the fact that many “opposition” groups were part of an externally funded “regime change” project spearheaded by radical jihadists connected to Al Qaeda.

For me, this pattern goes back even further. I have witnessed these techniques since the 1980s when the Reagan administration tapped into CIA psychological warfare methodsto rally the American people around a more interventionist foreign policy – to “kick the Vietnam Syndrome,” the public skepticism toward war that followed the Vietnam debacle.

Back then, senior CIA propagandist Walter Raymond Jr. was assigned to the National Security Council staff where he tutored young neocons, the likes of Elliott Abrams and Robert Kagan, drumming into them that the key was to personalize the propaganda by demonizing a particular leader, making him eminently worthy of hate.

Raymond counseled his acolytes that the goal was always to “glue” black hats on the side in Washington’s crosshairs and white hats on the side that Washington favored. The grays of the real world were to be avoided and any politician or journalist who sought to deal in nuance was disparaged as a fill-in-the-blank “apologist.”

So, in the 1980s, the Reagan administration targeted Nicaragua’s President Daniel Ortega, “the dictator in designer glasses,” as President Reagan dubbed him.

In 1989, before the invasion of Panama, Gen. Manuel Noriega got the treatment. In 1990, it was Saddam Hussein’s turn, deemed “worse than Hitler” by President George H.W. Bush. During the Clinton administration, the demon du jour was Serbia’s Slobodan Milosevic. In all these cases, there were legitimate criticisms of these leaders, but their evils were inflated to fantastical proportions to justify bloody military interventions by the U.S. government and its allies.

The main difference in recent years is that Official Washington’s neocons and liberal interventionists have taken aim at Russia with the goal of “regime change” in Moscow, a strategy that risks the world’s nuclear annihilation. But except for the stakes, the old script is still being followed.

Rather than a realistic assessment of what happened in Ukraine, the American people and the West in general have been fed a steady diet of propaganda. As U.S. neocons and liberal interventionists pushed for and achieved the violent overthrow of elected President Viktor Yanukovych, he was lavishly smeared as the embodiment of corruption over such items as a sauna in his official residence. Yanukovych wore the black hat and the street fighters of the Maidan, led by ultra-nationalists and neo-Nazis, wore the white hats.

However, after Yanukovych’s unconstitutional ouster, his supporters, concentrated in Ukraine’s ethnic Russian areas, resisted the putsch. But the Western storyline was simply a Russian “invasion.” The absence of any evidence – like photos of an amphibious landing in Crimea or tanks crashing across Ukraine’s borders – didn’t seem to matter. Since Americans and Europeans had already been prepped to hate Putin, no evidence apparently was needed. The New York Times and other mainstream publications just reported any accusations as flat fact.

Even the exposure of a pre-coup phone call in which neocon U.S. Assistant Secretary of State Victoria Nuland discussed with U.S. Ambassador Geoffrey Pyatt who would lead the post-coup regime and how to “glue this thing” or “midwife this thing” didn’t matter either. Evidence of U.S. coup plotting wasn’t welcome because it didn’t fit the narrative of brave young Ukrainians promoting democracy by overthrowing the democratically elected leader.

Indeed, the leaked phone call, which the Western media attributed to Russian intelligence, became – rather than proof of U.S. coup plotting – an example of Moscow’s use of “kompromat” (i.e., compromising material) against the “victim,” Assistant Secretary Nuland, who was embarrassed because she had also disparaged the European Union’s lack of aggressiveness with the pithy remark, “Fuck the E.U.”

So, while many of these U.S. propaganda patterns can be traced back to Reagan and his desire to “kick the Vietnam Syndrome,” they have truly become bipartisan. Up had become down whichever party was in office with the mainstream media reinforcing the propaganda themes and deceptions.

One can expect that the Trump administration will come to enjoy its own control over the levers of propaganda – especially given President Trump’s obsession with always being right no matter what the contrary evidence – but there has been some addition by subtraction in the changeover of administrations.

Many of the neocons and liberal hawks who nested in the Obama administration – people like Victoria Nuland – are gone. That at least creates the possibility for some fresh thinking on such issues as continuing the “information war” against Putin and Russia. A more realistic assessment regarding the Kremlin may be possible given the fact that Secretary of State-designate Rex Tillerson and National Security Advisor Michael Flynn are not Russo-phobes and have personal experience with the Kremlin.

But the Democrats – and even progressives – appear determined to keep alive the anti-Russian hysteria that reached “group think” levels in the final weeks of the Obama administration and is now being carried forward by leading liberal organizations.

As James W. Carden reported for The Nation, “In the time between the November election and [Trump’s] inauguration, the Center for American Progress (CAP) and its president, former Hillary Clinton aide Neera Tanden, have been at the forefront of what some are calling ‘the resistance.’ Yet one troubling aspect of ‘the resistance’ seems to be its belief that Trump owes his surprise victory in the early morning hours of November 9 to the Russian government.”

Carden cited a session at CAP’s Washington headquarters at which Sen. Dick Durbin, D-Illinois, and Tanden hammered home the U.S. intelligence community’s still evidence-free claims that Putin ordered his intelligence services to sabotage Clinton’s campaign and help Trump. Again, details and nuance were unwelcome and unnecessary since the villains were the thoroughly demonized Putin and the widely despised (at least in Democratic circles) Trump.

But there are multiple dangers from the continuation of this propaganda narrative: the obvious one is the risk that the Washington establishment will make the Putin-Trump “guilt” a certified “group think” rather than a charge that needs careful analysis and that certitude could lead to an eventual nuclear showdown with Russia.

Another risk, however, is that the Democrats will come to believe that Putin’s interference defeated Hillary Clinton and thus a desperately needed self-evaluation won’t happen.

Even if Putin did have his intelligence agents hack Democratic emails and then slipped them to WikiLeaks (although its founder Julian Assange and an associate, former U.K. Ambassador Craig Murray, have denied this), it is clear that the contents of the emails were legitimate and revealed some newsworthy facts about both the Democratic National Committee’s tilting the playing field against Sen. Bernie Sanders and what Clinton told Wall Street bankers in paid speeches that she was hiding from the voters. In other words, the emails weren’t disinformation; they provided real facts that the American people had a right to know before heading to the polls.

But the other key point is that these emails had little impact on the election. Even Clinton herself initially put the blame for her defeat on FBI Director James Comey for briefly reopening and then re-closing an investigation into her use of a private email server as Secretary of State. It was then that her poll numbers began to crater – and Putin had nothing to do with either her reckless decision to conduct State Department business through her private email server or Comey’s decisions regarding the investigation.

But the blame-Putin diversion has enabled the national Democratic Party to avoid reexamining its own contributions to Trump’s Electoral College victory, particularly its insistence on nominating Clinton despite many polls showing her high unfavorable numbers and a widespread recognition that 2016 was an anti-establishment year. The Democratic Party put on blinders to ignore the grave vulnerabilities of its candidate and the sour mood of the electorate.

In a larger sense, the Democratic Party ignored its own reputation as a home for internationalists, elitists and interventionists. Indeed, Clinton chose to cater to the neocons who are very influential in Official Washington but carry little weight in Middle America. Then, she made things worse by insulting many white blue-collar Americans as “deplorables.”

Yet, instead of conducting a thorough autopsy of their demise – sinking into minority status in Congress and across the country – the Democrats apparently think they can whistle past their political graveyard by blaming their defeat on Putin and by building a movement based on attacking Trump’s erratic and offensive behavior, very similar to the failed strategy that Clinton employed last fall.

Not only does this negative strategy threaten again to backfire but – by feeding into a new and dangerous Cold War – it risks tying the Democrats to conflict and militarism and letting the Trump Republicans position themselves as the alternatives to endless and escalating wars.