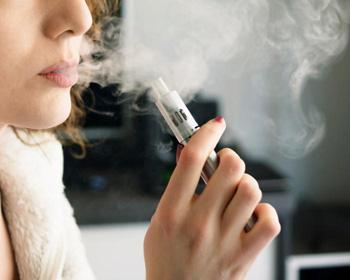 More and more people useelectronic cigarettes (e-cigarettes) instead of conventional ones, as the former are perceived to be safer. E-cigarettes do not contain tobacco and do not involve combustion.

E-cigarettes were first introduced in2006 in the United States. Since then, they have become particularly popular among teens. The number of teenagers who vape increasedfourfold between 2011 and 2015.

However, e-cigarettes still contain the addictive nicotine and some of the chemicals found in regular cigarettes. In 2009, the U.S. Food and Drug Administration (FDA) warned that e-cigarettes contain “detectable levels of known carcinogens and toxic chemicals to which users could be exposed.”

New research examines the link between regular e-cigarette use and the implications for cardiovascular risk.

Analyzing cardiovascular risk factors in those who use e-cigarettes

The study was led by Dr. Holly R. Middlekauff, of the David Geffen School of Medicine at the University of California in Los Angeles, and the findings were published in the journalJAMA Cardiology.

Dr. Middlekauff and team hypothesized that people who routinely use e-cigarettes would have increased oxidative stress and an imbalance in the cardiac autonomic tone – both considered cardiovascular risk factors.

The team also took blood tests and analyzed the blood for parameters of oxidative stress.

Finally, Dr. Middlekauff and colleagues conducted a statistical analysis. They used the Shapiro-Wilk test to examine the normal distribution of the variables, the T-test to compare the e-cigarette users with the control group, the Wilcoxon rank-sum test for p-values, and the Fisher’s exact test to calculate binary data.

E-cigarette users are more likely to have cardiovascular risk factors

The findings confirmed the researchers’ hypothesis.

The low-frequency component, as well as the low frequency to high frequency ratio, were increased among the e-cigarette users. This suggests that people who used e-cigarettes experienced a shift in their cardiac autonomic balance towards sympathetic predominance.

The sympathetic nervous system takes control of the cardiovascular system in “emergency” situations. It produces the “fight or flight” response when the individual is in danger, increasing the adrenaline levels in the heart.

As for oxidative stress markers, the researchers found an increased level of low-density lipoprotein oxidizability. This indicates that lipoproteins containing the apolipoprotein B are prone to oxidation.

Overall, this means that compared with the control group, users of e-cigarettes were more prone to increased cardiac sympathetic activity and increased oxidative stress – both signs of tobacco-related cardiovascular risk.

Therefore, habitual e-cigarette use has physiologic effects, many of which may seriously affect the users’ cardiovascular health. The authors caution against the cardiac risks and recommend further investigation of the adverse health effects of inhalable nicotine. They say:

“Nicotine, which is the major bioactive ingredient in e-cigarette aerosol, with its metabolites, may harbor unrecognized, sustained adverse physiologic effects that lead to an increased cardiovascular risk profile in habitual e-cigarette users.”