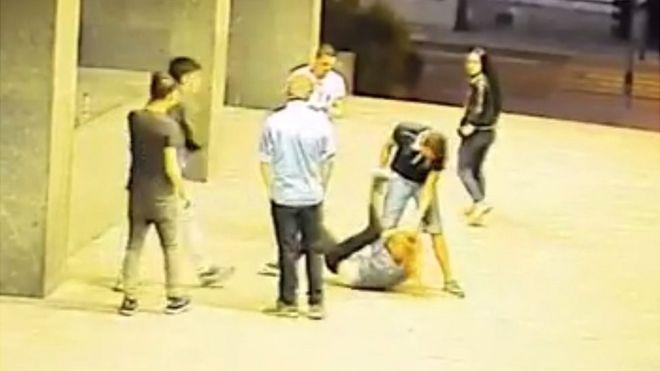 The video is shocking. CCTV footage shows a group of youths surrounding a teenage girl. A tussle ensues, and at one point one of the youths appears to stamp on the girl’s head.

It was widely shared. In December, it was posted on a Facebook page called “Never Again Canada”, with the caption: “Islamic migrants try and grab a girl and attempt to rape her somewhere in Europe”.

At the Czech interior ministry, David Chovanec recognised the footage instantly. It came from a security camera outside police headquarters.

“It did happen ‘somewhere in Europe’ – right here in Prague. The footage was all over the local news when the incident happened last spring,” he told the BBC.

“But they weren’t ‘Islamic migrants’. They were Czech citizens connected to the local drug scene. They were settling scores,” he continued.

The story was demonstrably false. It soon came to the attention of the interior ministry’s newly-founded Centre Against Terrorism and Hybrid Threats, of which Mr Chovanec is formally in charge.

The centre assesses disinformation by posing three questions: Is it disinformation? Are there publishable facts available to disprove it? Does it pose a threat to the country’s internal security?

In this case, he said, the answer to all three questions was yes, and the story was swiftly debunked on the centre’s website and dedicated Twitter account.

The new unit was set up last month to counter disinformation, much of which Czech officials believe is being created by the Kremlin to undermine democracy ahead of parliamentary and presidential elections.

In this instance there is no suggestion the story was spread by pro-Kremlin trolls; Never Again Canada is a pro-Israel website with a strongly Islamophobic tint.

Mr Chovanec says the source is largely irrelevant; the unit’s 15 specialists make decisions on the threat posed by the material itself, not its presumed creator.

Jakub Janda is no stranger to online trolling, and worse. The deputy director of Prague-based think tank European Values, he says his organisation’s headquarters have recently moved, for security reasons, into the basement of a villa near Prague Castle.

He says there are around four dozen Czech-language sites peddling fake or exaggerated news – much of which can be traced to Russia.

“These sites have three primary goals,” he told me.

“One is basically attacking politicians who have some kind of principled stand against aggressive Russian foreign policy, in Ukraine for example. The second goal is basically supporting those political figures who have very pro-Kremlin stances, such as the Czech president. And the third goal, the long-term one, is attacking Czech EU membership,” he explained.

The problem – both for him, and the Czech intelligence services – is that no-one knows who is behind many of these “alternative news” sites, which are read by 25% of Czechs.

It is clear who is responsible for Sputnik News – it’s the Czech language version of the Kremlin-run news agency.

We know AC24 is a Czech conspiracy theory site. One recent headline was: “Elites in Davos unveil plan to implant false memories in people’s brains.”

But who’s really behind Aeronet, with its steady diet of pro-Putin, anti-EU and pro-Trump coverage? Under a photo of a girl in a hijab, its top story on Wednesday was: “Parents beware! This is what NGOs are doing to your kids behind your backs when you’re at work. And it’s supported by the Education Ministry! You’ll never guess who your kids will be going to kindergarten with next September!”

No-one knows who runs it, despite several attempts by Czech investigative journalists to find out. The evidence suggests Aeronet is part of a nebulous web of state and non-state actors, Russian and Czech, sometimes motivated by political sympathies, sometimes by advertising revenue, sometimes both.

The Czech government’s modest attempt to identify the most egregious examples of disinformation has not been universally welcomed.

The new unit was heavily criticised by Czech President Milos Zeman, who often defends Russian foreign policy. “No-one has a monopoly on the truth,” he said.

His spokesman regularly mocks the unit, and has even set up a parody rival Twitter account named after Czechoslovakia’s communist-era censorship office.

But perhaps the greatest challenge will be overcoming one of the most enduring character traits of the Czech people – scepticism of officialdom.

“Czechs are inherently suspicious of what the ministry of interior in particular says,” says the former head of Czech military intelligence, Andor Sandor. He spent several years as a military attache at the Czech embassy in London, and now works as a private security consultant.

“I for one don’t believe the ministry of interior should be like the Vatican, telling people how they should interpret the Bible,” he said.