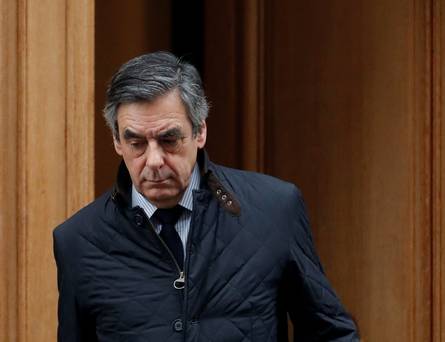 François Fillon, the embattled French conservative presidential contender, would be knocked out of this spring’s election in France in the first round, according to a shock poll, as a “fake jobs” scandal involving his British wife intensified yesterday.

The poll came as Mr Fillon accused the ruling French left of being behind the allegations, and said he was the victim of an “institutional coup d’état”.

He urged his demoralised camp to remain loyal “two more weeks” as cracks emerged over whether his campaign was fatally compromised.

Recent surveys placed Mr Fillon in pole position to beat far-right Front National leader Marine Le Pen in the presidential run-off on May 7. But the poll by Elabe for ‘Les Echos’ newspaper for the first time placed maverick former economy minister Emmanuel Macron as most likely to win the presidency on a “neither left nor right” ticket, with Ms Le Pen also gaining ground.

For April 23’s round one, voting intentions for Mr Macron were unchanged or up a point to 22-23pc. Ms Le Pen’s first round score was up by three points to 26-27pc. However, Mr Fillon’s score fell by between five and six points to 19-20pc. Mr Fillon faces elimination in both cases from the May 7 second round, as only the top two go through to the run-off.

Yves-Marie Cann, head of political studies at Elabe, said Mr Fillon was haemorrhaging support from “hard-right voters who used to back ex-president Nicolas Sarkozy and are now tempted by Le Pen, and centre-right voters are now leaning towards Macron”.

The poll was conducted on January 30 and 31, a few days after a newspaper report alleging that Mr Fillon’s wife Penelope was paid hundreds of thousands of euros in taxpayers’ money for a fictitious job as parliamentary assistant to her husband and his replacement.

A preliminary inquiry has been opened and the couple – who deny wrongdoing – were interviewed by police on Monday. Detectives searched Mr Fillon’s offices in the French parliament the following day, reportedly only to discover that Welsh-born Mrs Fillon had no entry badge.

‘Le Canard Enchaîné’, the investigative weekly that broke the story, then increased pressure on the Fillons by reporting yesterday that the amount of taxpayers’ money spent on Mrs Fillon and two of her children for allegedly fake jobs was higher than previously thought – around €900,000. She also faces allegations she was unfairly paid €100,000 to write a handful of articles for a magazine owned by the Fillons’ wealthy friend.

The surprise victor in November of primaries for his Les Républicains party, Mr Fillon has pledged to stand down if placed under formal investigation. But some right-wingers express doubts that he can continue given the daily revelations, despite the presumption of innocence.

Georges Fenech, a right-wing MP who had supported Mr Sarkozy’s nomination, said Mr Fillon’s candidacy was “highly compromised” and that his victory in party primaries should be considered “null and void”. He called for the party to hold an “extraordinary national council meeting” to decide what to do next. But Mr Fillon urged MPs at campaign headquarters to “hold on for 15 days” until the inquiry had run its course.

The allegations against Mr Fillon are particularly damaging as he has depicted himself as a champion of political probity and austerity to reduce state debt and deficit. As he sought to focus on rolling out his manifesto, his main rivals were preparing for two key rallies this weekend in the same southern historic city of Lyon to kick off their campaigns proper.

Mr Macron’s camp is expecting at least 10,000 people to show up to his on Saturday, while Ms Le Pen will be rolling out 140 “presidential commitments”, including plans to take France out of the euro, and to leave the EU unless it agrees to become a very loose cooperation of nations.

Yesterday, Ms Le Pen, who has tried to “de-demonise” her far-right party’s image in the run-up to the election, said she would not include a pledge to reimpose the death penalty in her manifesto, replacing it with “proper life imprisonment”.

She, too, is embroiled in corruption allegations, after the European parliament demanded she start repaying around €300,000 it says were wrongly paid to legislative aides and her bodyguard. Her entourage said she had no intention of paying the sum back, saying the party was the target of “persecution”.