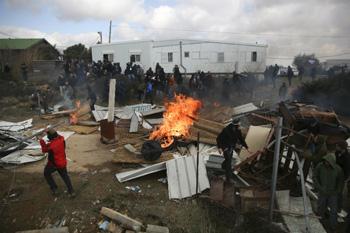 FEBRUARY 1, 2017  OFRA AND SILWAD, WEST BANK—A few dozen trailer homes on a hilltop may have never made such ripples internationally.

But the evacuation of Amona, which Israeli security forces started today after a years-long legal battle, has resonated far beyond the 40 families who live among the prickly weeds and rocks of this West Bank ridgeline. It is a crucial litmus test for how Israel adjudicates the competing claims and dreams of Israeli settlers and the Palestinians who live under Israeli occupation.

The court order to demolish Amona by Feb. 8 represents a victory for Palestinians, who presented documents showing that Amona was built on private Palestinian land.

But the Israeli government’s response, offering compensation to residents and drafting new legislation that would “legalize housing units built by settlers on private Palestinian land,” looks to critics like an end-run around the legal system – and an unfair victory for the settlers. Prime Minister Benjamin Netanyahu also announced 3,000 new settlement homes in the West Bank.

That speaks to the rising clout of the settler movement, which has become an important part of Prime Minister Benjamin Netanyahu’s base in the Likud party.

“The Israeli public pretty much doesn’t know where Amona is,” says Yohanan Plesner, president of the Israel Democracy Institute in Jerusalem. “But this group knows, cares, and … they’ll remember on political D-Day.”

Their rhetoric, and the way they’re pulling Israeli policy to the right, is widely seen as at least partially responsible for the UN Security Council’s resolution condemning Israeli settlements in a way not seen since 1980.

That was “a yellow card” warning, says Oded Revivi, chief foreign envoy for the YESHA Council, the settlers’ political arm. It was the result, he says, of the international community thinking, “Hey guys, they are going to go wild. And we need to try and have some sort of restraining order.”

A growing settlement – and then an outpost

When Aliza Herbst, an American immigrant, first moved to the Israeli settlement of Ofra in 1981, it felt to her like a rinky-dink town in Texas. She recalls an Arab farmer who would come in and out to tend to his fig orchard. Settlers would lend Arabs machinery, and teach them how to work with it.

But as Ofra expanded and Palestinian youths became politicized, tensions grew. In the mid-1990s, the Oslo accords designated the hilltop above Ofra, now known as Amona, as land that would eventually be controlled by the Palestinian Authority. That was seen by settlers as untenable for their security, so young adults from Ofra started going up there – first to guard the water tower that served their homes, and then, step by step, to live there.

Pinchas Vallerstein, who was mayor of the regional settler council at the time, was responsible for bringing in infrastructure such as electricity and roads, which cost millions of shekels.

But despite his investment in building Amona, he has insisted that the residents evacuate as the deadline looms for the court-ordered demolition.

“If you want to live in a democratic society and that’s important to you, you can disagree with a decision that the court makes, but at the end of the day, you have to live by it,” he says – a position that has made him deeply unpopular in Amona, “like a red flag in front of bull.”

A mile away, Abdulrahman Saleh steps out of a pickup truck and crosses the road. Ofra’s red roofs are spread out in neat rows before him, as he points up the long gradual slope leading up to Amona. He is the mayor of Silwad, a Palestinian town next door of 10,000 people – and, he adds, the owner of a patch of land up on that hillside that he hasn’t been able to access for years.

Mayor Saleh has worked closely with Yesh Din, a left-wing Israeli NGO, to pry this land out of the settlers’ grasp. He takes pride in the court victory, but has little faith in the Israeli legal system as a whole.

“I feel the democracy in Israel is just for their people. But for Palestinians, either in [historical Palestine] or here – it is like Bashar al-Assad, it’s dictatorial,” he says, referring to the Syrian president. “And for their people, it is 100 percent democracy.”

When interviewed in mid-January, he expressed doubt that Amona would be evacuated by Feb. 8, and said he and other local Palestinian mayors were planning a massive, nonviolent march on the land in protest.

Bashar Tahaa, a young man in a high-collared white sweater, says he would join. While he and others in the town have long felt provoked by settlers in the area, he has no interest in violent confrontation.

“We are people of high morals,” he says, checking out of an upscale Silwad grocery store stocked with Hershey’s chocolate syrup and Betty Crocker super moist cake mix – a nod to the town’s large contingent of Palestinian Americans. “They can provoke as much as they want, we won’t respond. I have ambition in life. I don’t want them to kill me.”

Diana Buttu, a Palestinian human rights lawyer and former adviser to the Palestinian negotiating team, agrees with the mayor’s view that Palestinians and their supporters “can only push so far using the Israeli legal system.”

“While it’s an important court victory in the sense that they’re still holding firm to this idea that you can’t just steal private Palestinian land and build settlements on it,” she says, “the Israeli government is finding all sorts of ways to go around it.”

Back in Ofra, Vallerstein and Herbst are deeply concerned about the way left-wing NGOs are using Israeli courts to undermine the settlement enterprise, which has quadrupled in size since Oslo – to the alarm of Palestinians, the Israeli left, and the UN. Amona, which was already the site of a major standoff between settlers and Israeli security forces in 2006, is just one of many targets in their crosshairs.

“What we’re hoping is to set a precedent for all these other cases,” says Ms. Herbst, who spent decades building up the Israeli settlements – recruiting immigrants, coordinating infrastructure development, and raising funds.

“If they solve this problem of manipulating the legal system, even if the price for that is that … Amona will be destroyed, it’ll still be a good thing,” says Vallerstein, talking with Herbst at her dining table on a recent Friday morning. “It’ll be a terrible thing, but at the same time, it won’t keep the population here from growing.”

Indeed, Agriculture Minister Uri Ariel of the Jewish Home party has already called for a new settlement on the ridge where Amona was built. “Here on this mountain range, there will be a new Jewish settlement and we will wave the Israeli flag here,” he says.