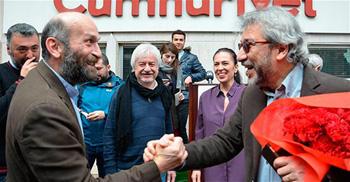 ‘We Are Arrested: A Journalist’s Notes from a Turkish Prison’ by Can Dündar (Biteback, 297 pages, £15)

Jail can often be very productive. Great works from “Don Quixote” to “The Consolation of Philosophy” to “De Profundis” have been penned while their authors were incarcerated. The pinnacle of 20th century Turkish literature, Nazım Hikmet’s “Human Landscapes from my Country,” was written in prison from 1938 to 1950. Jail may take away the prisoner’s liberty, but at least it gives them plenty of time for reflection.
Can Dündar wrote much of “We Are Arrested” inside Istanbul’s Silivri Prison, where he spent 92 days in solitary confinement awaiting trial. He had been arrested along with daily Cumhuriyet managing editor Erdem Gül in November 2015 on charges of espionage, helping a terrorist organization, trying to topple the government and revealing state secrets. As editor-in-chief of the newspaper, Dündar had in January 2015 published photographs of a covert arms shipment by Turkey’s National Intelligence Agency (MİT) to Islamist groups in Syria. President Erdoğan condemned the revelations as “high treason” and called for Dündar to be given two life sentences.

In covertly supplying the weapons, Dündar writes, “MİT was undertaking a mission it was not legally empowered to do and, by supplying weapons for a neighboring country’s civil war, was committing a crime. A crime that might have been in the government’s interest to conceal, and a journalist’s duty to expose.” Ankara has tried to draw analogies with the cases of Edward Snowden or Julian Assange. But Cumhuriyet did not hack the government system and steal classified information; it simply published evidence that was present in a legal investigation.

Originally published in Turkish, “We Are Arrested” is a snappy account of Dündar’s ordeal, “planned during long sessions of exercise, staring at the panorama of yellow walls, on the iron bed of the upper bunk in the cell and right next to the radiator on the lower.” The author has a cheerful demeanor, refusing to bow to pessimism. “When you’re inside, it’s only joy that will cure you, not sorrow. Your pain is alleviated through the happiness of your loved ones. Your jailer knows by your laughter that he can’t vanquish you. This is the triumph of life,” he writes.

That quotation hints at the self-congratulatory tone of parts of the book. “Might didn’t always make you right, but being right always made you mighty. We would derive our might from being right, and walk on, resolute, courageous,” Dündar writes with a striking lack of self-awareness. “I drew on George Orwell’s moral support: ‘In a time of universal deceit, telling the truth is a revolutionary act.’” In one painful metaphor, he uses the image of Sisyphus rolling a gigantic boulder of “truth” up a hill.

The most interesting sections are when Dündar describes how he became a kind of “one-man PR company” while in jail, trying to make as much noise as possible in multiple languages about shrinking freedoms in “the semi-open prison” that is Turkey. “I founded a public relations office whose entire inventory consisted of a plastic desk, a plastic chair, a pen and a wad of paper,” he writes. “I tried to make my voice heard with a letter, column, statement or message to every single visitor, every demonstration and every newspaper. I was like an accident victim who was desperate to be heard from the bottom of the well he’d fallen into.”

Dündar certainly succeeded in attracting attention overseas. He regularly appears in international media writing about his case and the deteriorating situation in Turkey, receiving awards from various press freedom groups. Sadly, this is easily exploited by Turkey’s populist nationalistic government, which complains that critics are slandering the country to hostile foreign powers. Dündar has been denounced in the pro-government press as a “traitor” and “foreign agent,” while Cumhuriyet is accused of being a pawn of shady U.S.-based Islamic preacher Fethullah Gülen, said to have masterminded the July 2016 military coup attempt. Dündar was sentenced to five years and ten months in jail in May 2016 but was allowed to go free pending an appeal. He has since moved to Germany and set up a new news website there (already blocked in Turkey), which of course only opens him up to more dark conspiracy theories.

Dündar refers to jail as a kind of rite of passage. “Just as ‘you ain’t marrying my daughter unless you’ve done your national service,’ ‘you ain’t calling yourself a writer unless you’ve done your bit behind bars,’” he writes. The walls of prison “[ring] with the voices, traces and words of the greatest masters of these lands.” Notoriously, in the aftermath of last year’s coup attempt Turkey has once again become the world’s leading jailer of journalists. “We Are Arrested” is a vivid window into a wretched episode.