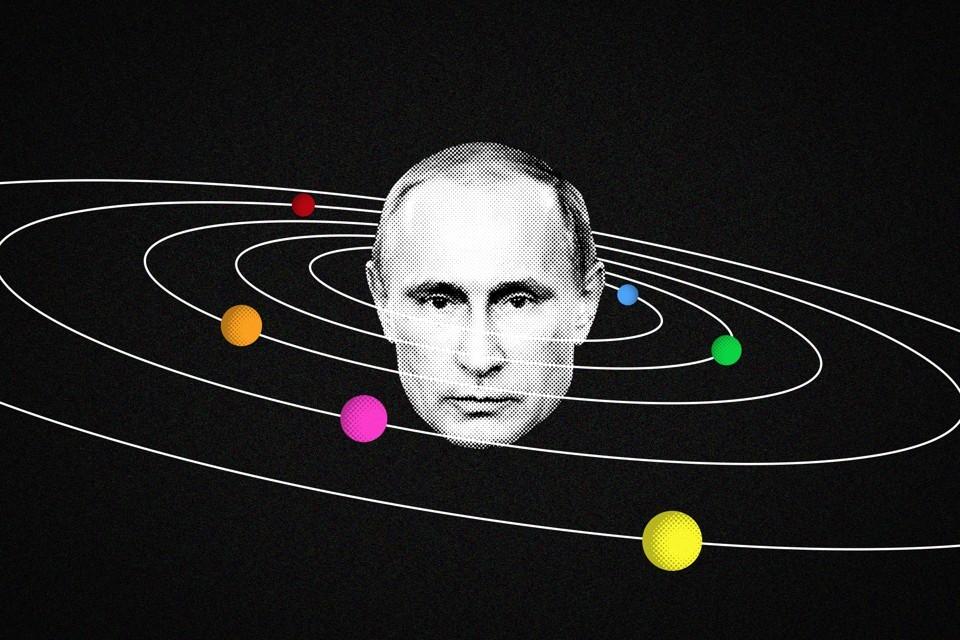 How the Russian president became the ideological hero of nationalists everywhere

In 2012, Vladimir Putin returned to the presidency after a four-year, constitutionally imposed hiatus. It wasn’t the smoothest of transitions. To his surprise, in the run-up to his inauguration, protesters filled the streets of Moscow and other major cities to denounce his comeback. Such opposition required dousing. But an opportunity abroad also beckoned—and the solution to Putin’s domestic crisis and the fulfillment of his international ambitions would roll into one.

After the global financial crisis of 2008, populist uprisings had sprouted across Europe. Putin and his strategists sensed the beginnings of a larger uprising that could upend the Continent and make life uncomfortable for his geostrategic competitors. A 2013 paper from the Center for Strategic Communications, a pro-Kremlin think tank, observed that large patches of the West despised feminism and the gay-rights movement and, more generally, the progressive direction in which elites had pushed their societies. With the traditionalist masses ripe for revolt, the Russian president had an opportunity. He could become, as the paper’s title blared, “The New World Leader of Conservatism.”

Putin had never spoken glowingly of the West, but grim pronouncements about its fate grew central to his rhetoric. He hurled splenetic attacks against the culturally decadent, spiritually desiccated “Euro-Atlantic.” He warned against the fetishization of tolerance and diversity. He described the West as “infertile and genderless,” while Russian propaganda derided Europe as “Gayropa.” At the heart of Putin’s case was an accusation of moral relativism. “We can see how many of the Euro-Atlantic countries are actually rejecting their roots, including the Christian values that constitute the basis of Western civilization,” he said at a conference in 2013. “They are denying moral principles and all traditional identities: national, cultural, religious, and even sexual … They are implementing policies that equate large families with same-sex partnerships, belief in God with the belief in Satan.” By succumbing to secularism, he noted on another occasion, the West was trending toward “chaotic darkness” and a “return to a primitive state.”

Few analysts grasped the potency such rhetoric would have beyond Russia. But right-wing leaders around the world—from Rodrigo Duterte in the Philippines to Nigel Farage in Britain to Donald Trump in the U.S.—now speak of Putin in heroic terms. Their fawning is often discounted, ascribed to under-the-table payments or other stealthy Russian efforts. These explanations don’t wholly account for Putin’s outsize stature, however. He has achieved this prominence because he anticipated the global populist revolt and helped give it ideological shape. With his apocalyptic critique of the West—which also plays on anxieties about Christendom’s supposedly limp response to Islamist terrorism—Putin has become a mascot of traditionalist resistance.

If Europe’s far-right parties were Putin’s landing beach, he has made inroads, and hovers over the current French presidential election. During last year’s campaign for the nomination of France’s Republican Party—the newly rechristened home of the center-right—candidates tripped over themselves to pay obeisance. Former President Nicolas Sarkozy, vying to resurrect his career, sprinted away from his own history of slagging the Russian strongman. On a trip to St. Petersburg in June, he made a point of stopping for a photo op with Putin, pumping his hand and smiling broadly. Sarkozy’s pre-campaign book swooned, “I am not one of his intimates but I confess to appreciating his frankness, his calm, his authority. And then he is so Russian!” These were gaudy gestures, but hardly idiosyncratic. Sarkozy’s rival François Fillon behaved just as effusively, though his affection seemed less contrived—during his years as prime minister, from 2008 to 2012, he cultivated a tight relationship with the man he has called “my dear Vladimir.” In November, Alain Juppé, the Republican contender initially favored by oddsmakers, moaned, “This must be the first presidential election in which the Russian president chooses his candidate.” But deriding his opponents for “acute Russophilia” hardly helped him: Fillon is now the party’s nominee, having drubbed Juppé by more than 30 points.

The French embrace of Putin has roots in the country’s long history of Russophilia and anti-Americanism. But Putin’s vogue also stems from the substance of his jeremiads, which match the mood of France’s conservative base. As French book sales reveal, the public has an apparently bottomless appetite for polemics that depict the country plummeting to its doom. Much anxiety focuses on the notion of le grand remplacement, the fear that France will turn into a Muslim country, aided by native-born couples’ failure to reproduce. The gloom is xenophobic, but also self-loathing. Right-wing polemicists bellow that France will squander its revolutionary tradition and cultural heritage without lifting a finger to save itself. The defining screed is Éric Zemmour’s The French Suicide, an unabridged catalog of the forces sucking the vitality from his country—post-structuralist academics, unpatriotic businessmen, technocrats in the European Union.

Contrary to prevailing wisdom, the new populism cannot be wholly attributed to economic displacement. In a short period of time, the West has undergone a major cultural revolution—an influx of immigrants and a movement toward a new egalitarianism. Only a decade ago, an issue like gay marriage was so contentious that politicians like Barack Obama didn’t dare support the cause. The movement’s success seemed like one of the marvels of the age—an object lesson of what can happen when the internet helps tie people together and the entertainment industry preaches tolerance. It seemed that the culture wars had been extinguished, that the forces of progress had won an unmitigated victory.

Except they hadn’t. In search of a global explanation for the ongoing revolt, Pippa Norris of Harvard’s Kennedy School and Ronald Inglehart of the University of Michigan have sifted through polling data and social science. They’ve found that right-wing populists have largely fed off the alienation of older white voters, who are angry about the erosion of traditional values. These voters feel stigmatized as intolerant and bigoted for even entertaining such anger—and their rage grows. “These are the groups most likely to feel that they have become strangers from the predominant values in their own country, left behind by progressive tides of cultural change,” Norris and Inglehart write. Their alienation and fear of civilizational collapse have eroded their faith in democracy, and created a yearning for a strongman who can stave off catastrophe.

Gay marriage is a divisive issue in France, where Fillon has vowed to block adoption by same-sex couples. The battle against Islamism also remains a rallying cry; Fillon’s campaign manifesto is called Conquering Islamic Totalitarianism. When he genuflects before the Russian president, he knows that his base yearns for everything Putin embodies—manliness, thumbing one’s nose at political correctness, war with the godless cosmopolitans in Brussels, refusal to tolerate the real and growing threat of terrorism. As the Hudson Institute’s Benjamin Haddad told me, “Fillon may justify his embrace of Putin with international relations, but he is increasingly a symbol for domestic purposes.”

Putin has inverted the Cold War narrative. Back in Soviet times, the West was the enemy of godlessness. Today, it’s the Russian leader who seeks to snuff out that supposed threat. American conservatives are struggling with the irony. They seem to know that they should resist the pull of Putinism—many initially responded to his entreaties with a ritualistic wringing of hands—but they can’t help themselves.

In 2013, the columnist Pat Buchanan championed Putin as an enemy of secularism: “He is seeking to redefine the ‘Us vs. Them’ world conflict of the future as one in which conservatives, traditionalists, and nationalists of all continents and countries stand up against the cultural and ideological imperialism of what he sees as a decadent west.” This type of homage became a trope among conservative thinkers—including Rod Dreher and Matt Drudge—and in turn influenced their followers. In mid-2014, 51 percent of American Republicans viewed Putin very unfavorably. Two years later, 14 percent did. By January, 75 percent of Republicans said Trump had the “right approach” toward Russia. (When asked about this change, Putin replied, “It’s because people share our traditional sensibilities.”)

Kulturkampf is not merely a diagnosis of the world; it is a political strategy.

Donald Trump, who hardly seems distraught over the coarsening of American life, is in some ways a strange inductee into the cult of Putin. Indeed, of the raft of theories posited to explain Trump’s worshipful attitude toward the Russian leader, many focus less on ideology than on conspiracy. And yet, Trump’s analysis of the world does converge with Putin’s. Trump’s chief ideologist, Steve Bannon, clearly views Western civilization as feckless and inert. In 2014, Bannon spoke via Skype at a conference hosted by the Human Dignity Institute, a conservative Catholic think tank. Shortly after the election, BuzzFeed published a transcript of his talk, which was erudite, nuanced, and terrifying.

Bannon was clear-eyed about Putin’s kleptocratic tendencies and imperial ambitions. That skepticism, however, didn’t undermine his sympathy for Putin’s project. “We, the Judeo-Christian West, really have to look at what [Putin’s] talking about as far as traditionalism goes,” Bannon said. He shared Putin’s vision of a world disastrously skidding off the tracks—“a crisis both of our Church, a crisis of our faith, a crisis of the West, a crisis of capitalism.” The word crisis is used so promiscuously that it can lose meaning, but not in this case. “We’re at the very beginning stages of a very brutal and bloody conflict,” Bannon said, exhorting his audience to “fight for our beliefs against this new barbarity that’s starting, that will completely eradicate everything that we’ve been bequeathed over the last 2,000, 2,500 years.”

Of course, Kulturkampf is not merely a diagnosis of the world; it is a political strategy. Putin has demonstrated its efficacy. When protesters looked like a challenge to his rule, he turned the nation’s attention to gays and lesbians, whom he depicted as an existential threat to the Russian way of life. The journalist Masha Gessen described this fomented wave of homophobia as “a sweet potion for a country that had always drawn strength and unity from fearmongering.” The secularist scourge would later be used to smear those who opposed the invasion of Ukraine: Pro-European demonstrators in Kiev were portrayed as wanting same-sex marriage. Traditionalism has allowed Putin to consolidate power while sucking the life from civil society.

The specter of decline has haunted the West ever since its rise. But the recent spate of jeremiads is different. They have an unusually large constituency, and revisit some of the most dangerous strains of apocalyptic thinking from the last century—the fear of cultural degeneration, the anxiety that civilization has grown unmanly, the sense that liberal democracy has failed to safeguard civilization from its enemies. Trump doesn’t think as rigorously or as broadly as Putin, but his campaign was shot through with similar elements. If he carries this sort of talk into office, he will be joining a chorus of like-minded allies across the world.

There is little empirical basis for the charge of civilizational rot. It speaks to an emotional state, one we should do our best to understand and even empathize with. But we know from history that premonitions of imminent barbarism serve to justify extreme countermeasures. These are the anxieties from which dictators rise. Admiring strongmen from a distance is the window-shopping that can end in the purchase of authoritarianism.