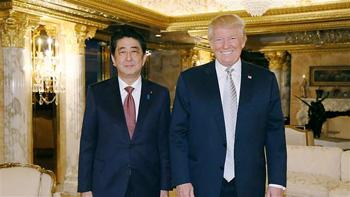 An upcoming meeting between Japanese Prime Minister Shinzo Abe and US President Donald Trump is set to extend by one day, sources say.

Two Japanese government sources with direct knowledge of the meeting said on Thursday that Abe and Trump were planning to extend their meeting, due to start on February 10 in Washington, by one day.

According to the sources, there are arrangements that Abe also meet Trump at his Mar-a-Lago private resort in Florida on February 11.

Trade and currency policy are likely to top the meeting’s agenda.

The new US president has slammed the lack of access to the Japanese auto market for American producers. He has also said Tokyo is using its monetary policies to weaken its currency against the US dollar to gain a trade advantage.

Japan is expected to defend its automotive sector in the upcoming meeting by arguing that it has built manufacturing plants in the US. Tokyo will also likely stress that its monetary policy is intended to spur inflation and not trigger competitive devaluation

However, a Japanese government spokesman has said the details of Abe’s visit have not been worked out yet.

In November, Abe became the first head of state to hold a face-to-face meeting with then President-elect Trump.