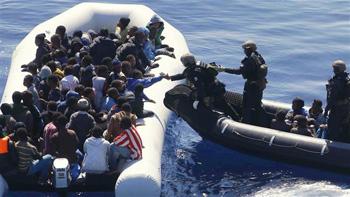 Libya’s UN-backed Prime Minister Fayez al-Serraj says his country may allow NATO and European Union (EU) navies to cooperate with its coastguard and operate in Libyan waters to contain people-smuggling across the sea.

“If there is something to be carried out jointly between the Libyan navy and any other party interested in extending a hand to the Libyan navy, that would be possible,” Serraj said following Wednesday talks with NATO Secretary General Jens Stoltenberg in Brussels.

“Of course, we have to modernize our navy flotilla and enhance its capacities. NATO or any other friendly nation on a bilateral basis could extend a hand in this,” he said.

European countries have been coping with a crisis caused by the inflow of Middle Eastern and North African refugees, who often use Libyan coasts to board vessels operated by human traffickers to get to Europe. Affected countries have for some time been speaking of the need to tackle the problem at its taproot — in Libyan waters. But the lack of a strong central government in Libya has left Europe without a local partner for any push against smugglers in the North African country.

Serraj’s open stance toward cooperation with NATO may now increase hopes for such European bids. The Libyan statesman is, however, struggling to assert his authority in the country while also attempting not to be viewed as yielding excessively to outside forces.

Both NATO and the military forces of individual European countries would need Libyan government consent to operate inside Libya’s sovereign waters.

Meanwhile, a report by a Dutch think tank has accused elements within the Libyan coastguard of involvement in the smuggling of the refugees and said that returning anyone caught on boats to coastal detention centers in Libya was risky since conditions there were “horrendous.”

The Netherlands-based Clingendael Institute said refugees intercepted or rescued at sea by the Libyan coastguard were sent to detention centers “where they often spend months languishing with no legal recourse, subject to the whims of their jailers.”

The institute further said that some smugglers tortured asylum seekers to secure the release of more money from their families.

“Moreover, migrants are reportedly sold to criminal groups if they cannot pay for their voyage across the Mediterranean: for €15,000 they were sold to groups, mostly Egyptians, who are involved in removing and selling organs. Finally, based on self-reporting by migrants, up to 40% of migrants are forced on to boats,” it said.

As weather conditions are to improve with the coming of spring, a surge is expected in the number of refugees taking to the Mediterranean Sea on the perilous journey to Europe.