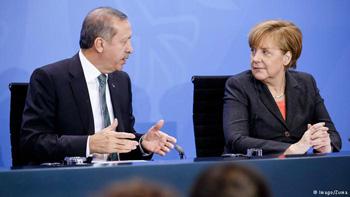 Anticipation over Angela Merkel’s meeting with Turkish President Erdogan in Ankara on Thursday is high. Will the chancellor end up strengthening Erdogan’s autocratic lust for power, or provide a voice for democracy?

This is an official visit that comes with some heavy baggage. German Chancellor Angela Merkel can be guaranteed to receive international attention when she travels to Ankara on Thursday. It is her first visit to Turkey since the failed military coup on July 15 last year. Since then, President Recep Tayyip Erdogan has transformed the country in autocratic style.

Tens of thousands of opposition politicians, journalists, public prosecutors and ordinary citizens have been arrested. Critical media have been closed down; the Kurdish opposition alliance has been dissolved.

The allegations are always the same: The parties involved took part in the failed coup.

The Turkish government holds the supporters of the Gülen movement responsible for the attempted putsch. The Islamic-conservative AKP government routinely rejects any international criticism of its crackdowns.

On the other hand it accuses Germany of lacking solidarity in the fight against alleged terrorism. In addition, Turkey has claimed that Germany has been providing a refuge to the banned Kurdistan Workers’ Party (PKK) so that they can procure funds and recruit fighters.

These are not good omens for Merkel’s upcoming visit. Many opposition politicians in Berlin believe the visit is sending the completely wrong signal. Left Party MP Sevim Dagdelen believes that Merkel’s visit is coming at a particularly “inopportune moment.” She recently said in an interview on German public radio that the chancellor’s presence, just weeks before the constitutional referendum, could only be seen as providing support for Recep Tayyip Erdogan.

Just over a week ago, Erdogan’s ruling AKP party managed to push the bill for constitutional reform, providing for a presidential system, through parliament. The new system would provide the president with significantly more power.

The Green Party MP and vice-president of the German parliament, Claudia Roth, drew parallels with Merkel’s last official visit to Turkey in 2015. Roth told the news agency DPA that Erdogan misused this meeting as a welcome platform for his then election campaign. Theforthcoming referendum will only serve to bring about the “abolition of parliamentary democracy,” according to Roth.

She further added that if Merkel remains silent on human rights abuses in Turkey, this would signal to Erdogan that he is able to blackmail Europe with his threat of opening the borders for refugees. The EU-Turkish refugee pact, to halt the flow of refugees traveling across the Aegean sea, has resulted in a greatly reduced number of asylum seekers arriving in Greece. Ankara has once again threatened to terminate the agreement.

Government spokesman Steffen Seibert strongly rejected such criticism of the chancellor’s visit to Turkey. “The allegations, that the chancellor would take any position on the forthcoming Turkish referendum, are absurd,” he said, claiming the trip was about making an official visit to a NATO partner, that is also an important neighboring state to the EU. “Particularly in times like these, when there is the situation in Syria to discuss, when there are bilateral issues on the table, as well as the relationship between Turkey and the EU, it is particularly important to seek out a dialogue.”

But intergovernmental discussions are not enough. In an interview with DW, Marie Lucas, expert on Turkey from Germany’s branch of Amnesty International, demanded that the chancellor actively call for the observance of human rights. “Chancellor Merkel must raise the issue of the imprisonment of peaceful government critics and she should also meet with members of the opposition and persecuted human rights activists,” she said. “Germany can obviously still exert its influence, and should do so.”

Some observers suspect that there are sound reasons for this silence. It was recently revealed that around 40 Turkish officers applied for asylum in Germany after the attempted coup. The officers, who were stationed at NATO bases, fear that a return to Turkey could cost them their freedom, and in some cases, their lives. The Turkish Defense Minister Fikri Isik issued a warning to the German government on CNN Türk against accepting these asylum applications. He said that to grant these applications, “would have very serious consequences.”

Berlin stressed that the asylum procedures would be vetted according to the usual methods. The deciding factors being the statutory provisions of the German asylum law, which would be “checked case-by-case by the authority in charge.”

Whether this response is sufficient for the Turkish government could play a role in the success of Merkel’s visit. Baden-Wurttemberg State Premier Winfried Kretschmann said he did not envy the chancellor this task, but added “if she can’t pull it off, then no one can.”