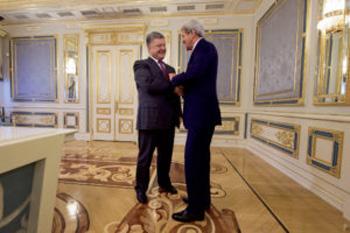 Less than two weeks into office, President Trump faces one of the first big tests of his non-confrontational policy toward Russia. As new fighting erupts in Eastern Ukraine, the Kiev regime and its U.S. supporters are predictably demanding a showdown with Vladimir Putin.

Initial evidence suggests, however, that the latest flare-up in this nearly three-year-old conflict was precipitated by Kiev, possibly in the hope of forcing just such a confrontation between Washington and Moscow. It’s looking more and more like a rerun of a disastrous stunt pulled by the government of Georgia in 2008, which triggered a clash with Russia with the expectation that the George W. Bush administration would come to its rescue and bring Georgia into the NATO alliance.

After months of relative quiet, the fighting in Ukraine erupted on Jan. 28 around the city of Avdiivka, a now-decrepit industrial center. Eight pro-government fighters and fiveseparatists apparently died in the first two days of hostilities. Meanwhile, residents of the city are struggling to survive heavy shelling and sub-zero weather with no heating.

Perennial critics of Russia were quick to blame Moscow for the renewed bloodshed. “We call on Russia to stop the violence (and), honor the cease-fire,” declared a State Department official.

The Washington Post’s reliably neo-conservative editorial page suggested that Russia felt liberated to unleash rocket and artillery barrages after Putin spoke with Trump by phone, with the goal of wrecking a meeting between Ukrainian President Petro Poroshenko and German Chancellor Angela Merkel.

The Russian onslaught “look(s) a lot like a test of whether the new president will yield to pressure from Moscow,” the Post declared, as if this were Czechoslovakia, 1938, all over again.

Poroshenko was quick to take advantage of the clash by asking, rhetorically, “Who would dare talk about lifting the sanctions in such circumstances?” Just last month, Austria’s foreign minister called for an easing of sanctions on Russia in return for “any positive development” in Ukraine. President Trump has been noncommittal about sanctions in the face of full-throated demands by congressional hawks in both parties to keep them in place.

The jury is still out on who provoked the latest violence, but Radio Free Europe/Radio Liberty, established by the U.S. government to broadcast propaganda during the height of the Cold War, reported Monday:

“Frustrated by the stalemate in this 33-month war of attrition, concerned that Western support is waning, and sensing that U.S. President Donald Trump could cut Kyiv out of any peace negotiations as he tries to improve fraught relations with Moscow, Ukrainian forces anxious to show their newfound strength have gone on what many here are calling a ‘creeping offensive.’

“Observers say the Ukrainians appear to be trying to create new facts on the ground . . . In doing so, the pro-Kyiv troops have sparked bloody clashes with their enemy, which has reportedly made advances of its own — or tried to — in recent weeks.”

A senior member of Europe’s Special Monitoring Mission to Ukraine warned, “The direct result of forward moves is escalation in tension, which often turns to violence.” How right he was.

It’s hard to see what Putin gains from new fighting, at a time when Trump faces an army of skeptics at home for his go-easy-on-Russia strategy. Poroshenko has everything to gain, on the other hand, by pressing Americans and West Europeans to reaffirm their support for his government, which took power after a 2014 coup that ousted elected President Viktor Yanukovych, who was strongly supported in eastern Ukraine and Crimea.

The situation is reminiscent of the August 2008 conflict between Russia and its neighbor on the Black Sea, Georgia. A bloody clash between the two countries’ armed forces in the tiny enclave of South Ossetia prompted a blast of militant rhetoric from American hawks.

It may have been significant that the Georgian president’s paid U.S. lobbyist was also presidential candidate John McCain’s chief foreign policy adviser. As one analystcommented at the time, “McCain’s swift and belligerent response to the Soviet actions in Georgia has bolstered his shaky standing with the right-wing of the Republican Party. . . . Since the crisis erupted, McCain has focused like a laser on Georgia, to great effect. According to a Quinnipiac University National Poll released on August 19 he has gained four points on Obama since their last poll in mid-July and leads his rival by a two to one margin as the candidate best qualified to deal with Russia.”

Yet when the smoke settled, it turned out that Georgia, not Russia, had started the war by launching an artillery barrage against South Ossetia’s capital city. It was a ploy by Georgia’s President Mikheil Saakashvili to drag the West into supporting his campaign to take over the enclave.

The independent International Crisis Group had warned in 2007 that Georgia’s risky strategy of provoking “frequent security incidents could degenerate into greater violence.”

A year later, following the brief war with Russia, an ICG investigation reported authoritatively that it began with a “disastrous miscalculation by Georgian leadership,” who “launched a large-scale military offensive” into the Russian-occupied enclave, killing dozens of civilians and causing severe damage to South Ossetia’s capital from artillery barrages.

The report also criticized “Russia’s disproportionate counter-attack,” which it deemed a response to “the decade-long eastward expansion of the NATO alliance” and other grievances.

Putting blame aside, the ICG report observed that “The Russia-Georgia conflict has transformed the contemporary geopolitical world, with large consequences for peace and security in Europe and beyond.” Indeed, it marked one of the greatest setbacks in post-Cold War relations between Moscow and the West until the 2014 Ukraine crisis.

If the 2017 Ukraine crisis gets out of hand, the consequences for peace and security may be just as great or greater. It will be informative to see whether President Trump and his national security team get the straight facts before capitulating to the interventionists who want to see U.S.-Russian relations remained strained and volatile.