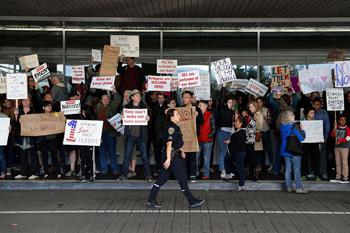 It’s been deeply heartening to see the intensity and enthusiasm of the resistance to President Donald Trump’s executive order freezing immigration from seven majority-Muslim countries. But precisely the intensity of the effort, complete with all-night lawyers at major airports, poses a challenge: Generating — and maintaining — a heightened sense of panic and outrage at every Trump policy move will be unsustainable over four years. If political energy isn’t expended wisely, it will dissipate quickly, and opposition will gradually fade.

What’s needed is a guideline to know when to declare that the sky is falling — and when to express measured, reasoned disagreement with policies that progressives consider mistaken.

So here’s a proposed guideline: If a policy is being changed, that’s a reason to state opposition and keep an eye on how the policy changes are implemented. If the rules for making policy are being broken, it’s time to make a lot of noise.

To see the difference, take some examples from Trump’s executive orders in the first week of his presidency.

Scrapping the Trans-Pacific Partnership trade deal is, in my view, a foreign policy mistake that weakens the U.S. relative to China. The TPP was never as much about trade as it was about strategically combating China by creating a Pacific trade community that excluded it. Now China will happily enter the breach and seal its own deal with many or even all the same countries that were poised to join TPP.

The U.S. president, however, has the unquestioned authority to build or break treaty deals that haven’t been signed. There’s nothing particularly unusual about how Trump put his decision into effect.

What’s more, TPP didn’t yet exist, and might not have been approved by the U.S. Senate even if signed.

Similar considerations surround Trump’s executive order restoring the so-called Mexico City policy that bars U.S. aid to international organizations that perform or counsel abortion. I don’t agree with the policy, which very likely will increase abortions by defunding organizations that distribute birth control. And it has to be carefully crafted around the Supreme Court’s 2013 decision in AID v. Alliance for Open Society, which protected the free speech of organizations that take federal money.

Contrast the executive order that purports to freeze federal funds forsanctuary cities. The president has broad executive power over immigration enforcement, and Barack Obama used his discretionary power to protect the so-called Dreamers and other undocumented people. Trump is entitled to use his discretion to crack down — assuming he implements what he preaches, which is far from certain.

However, the president doesn’t have the inherent power to override grants to cities put in place by Congress. And the Supreme Court held in the first Affordable Care Act case that Congress can’t conditionally pull federal funding when doing so would constitute a “gun to the head” of state recipients.

Trump’s sanctuary-cities order thus flouts the rules of the game, because the president can’t order cities around. Like his tweet threatening to “send in the Feds” to Chicago, it betrays a willful ignorance of the limits of executive authority. That’s a very serious worry — one that calls for outrage.

The same, of course, was true of the immigration order, which is full of legal holes and in my view violates religious liberty.

Trump’s orders on the Keystone XL and Dakota Access pipelines fall somewhere in between. On the one hand, the president does have final approval over pipeline decisions, exercised by Obama in the negative in the case of Keystone.

It was always true that a Republican could reverse Obama’s decision. And indeed, the State Department report produced by the Obama administration concluded that the pipeline wouldn’t have a meaningful negative impact on carbon emissions, because the Canadian oil to be carried by the pipeline would be exported some other way if not via the pipeline. Obama vetoed the pipeline not for direct climate reasons but because he said it would undercut U.S. leadership on climate change.

On the other hand, Trump didn’t seem to consider Obama’s rationale at all — even for a minute. He therefore short-circuited the procedures for decision-making, which demands analysis and balancing.

That may not be legally actionable. Nevertheless, it should be emphasized that Trump isn’t even considering the bigger picture. He’s just making a knee-jerk anti-environmental decision. That’s cause for alarm, at least if it becomes a pattern.

No guideline is perfect. But without them, progressives aren’t going to be able to spend the next four years yelling. They’re going to get hoarse and exhausted — and that will make their protests less effective, not more.