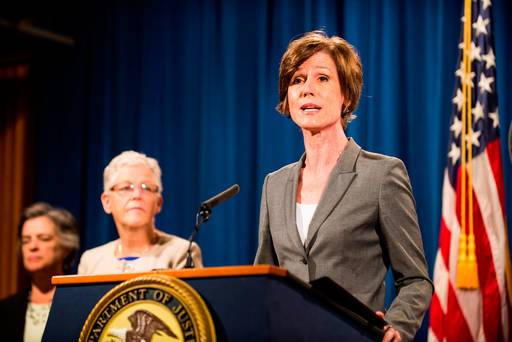 The acting attorney general who was fired by Donald Trump after opposing his immigration ban has been nominated for the John F Kennedy Profile in Courage Award.

Sally Yates sparked controversy after she refused to back the President’s travel ban which halted admission to refugees and as well as immigrants from seven Muslim-majority countries.

After a federal judge ordered a review of the policy, Ms Yates announced that her staff at the Justice Department would not seek to defend it in court as she objected on grounds of conscience, writing in a letter to her staff that she wasn’t “convinced that the defense of the executive order is consistent with these responsibilities, nor am I convinced that the executive order is lawful.”

Democrat politician Jackie Speier has announced she has nominated Ms Yates for the Profile in Courage Award, which is presented in memory of former President John F Kennedy. The prize is described as “the nation’s most prestigious award for public servants”.

The award’s mission statement says: “The award recognizes a public official (or officials) at the federal, state or local level whose actions demonstrate the qualities of politically courageous leadership in the spirit of Profiles in Courage, President Kennedy’s 1957 Pulitzer prize-winning book, which recounts the stories of eight U.S. Senators who risked their careers by embracing unpopular positions for the greater good.”

Mr Trump has defended his decision to fire Ms Yates. In a statement announcing termination of her employment, a White House press officer wrote: “The acting Attorney General, Sally Yates, has betrayed the Department of Justice by refusing to enforce a legal order designed to protect the citizens of the United States. This order was approved as to form and legality by the Department of Justice Office of Legal Counsel.

“Ms Yates is an Obama Administration appointee who is weak on borders and very weak on illegal immigration. It is time to get serious about protecting our country.”

In the absence of Ms Yates, US Attorney for the Eastern District of Virginia has been appointed as acting Attorney General. The position is a short term and temporary role while the Senate confirms President Trump’s pick Jeff Sessions, who is currently being resisted by Democratic Senators.