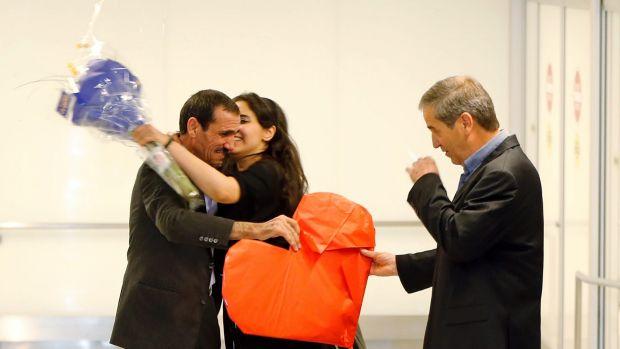 Los Angeles: An Iranian man turned away from Los Angeles International Airport under President Donald Trump’s executive order barring people from seven Muslim-majority nations has arrived back in the US under a federal judge’s order.

Ali Vayeghan arrived at the Los Angeles airport Thursday, where he was greeted by family members. They handed him a bouquet of California-grown flowers.

Vayeghan declined to comment on Trump or the order when speaking with reporters at Los Angeles International Airport but said through an interpreter, “This is what human rights look like.”

Other well-wishers sang, “This Land is Your Land.”

Vayeghan’s family was waiting to meet him Friday when he was detained for several hours, then sent back to Iran. He was coming to the US to visit family, including a son he hadn’t seen in 12 years.

A federal judge on Sunday ordered US authorities bring him back.

He was among hundreds detained or turned away from airports after the ban was implemented.

A watchdog agency at the US Department of Homeland Security said it is planning to review how President Donald Trump’s immigration executive order to temporarily suspend travel from seven majority-Muslim nations was implemented.

The review of Friday’s order was being planned “in response to congressional request and whistleblower and hotline complaints,” the DHS’s Office of Inspector General said in a statement late Wednesday.

The watchdog agency would also look at “DHS’ adherence to court orders and allegations of individual misconduct on the part of DHS personnel,” the statement said. “If circumstances warrant, the OIG will consider including other issues that may arise during the course of the review.”

The order, which barred Syrian refugees indefinitely and imposed a 90-day suspension on people from seven predominantly Muslim countries, triggered widespread protests and caused confusion for travelers around the world.

It also spurred several legal challenges, in particular over the initial detention or barring from flights of legal permanent residents who hold US green cards.

The department does not comment on investigations by the Office of the Inspector General.

Homeland Security Secretary John Kelly said on Tuesday that no member of the Homeland Security team intentionally ignored a court order and that the department was in compliance with judicial orders on immigration.

The White House said on Wednesday it had issued updated guidance making clear green card holders would not need a waiver to enter the United States.

In California, a federal judge in Los Angeles ruled that Trump’s administration must allow immigrants with initial clearance for legal residency to enter the United States despite the ban. Massachusetts, New York, Virginia and Washington state have also challenged the order.

The OIG statement said it would provide a final report to Kelly, the US Congress and the public after its review but didn’t say how long the review would take.

DHS includes the Customs and Border Protection and Immigration and Customs Enforcement agencies.

Democratic US Senators Tammy Duckworth and Dick Durbin had sought the investigation.

“Though I’m encouraged by the DHS Inspector General’s decision to investigate the chaotic implementation of this un-American and unconstitutional executive order, I will continue to fight for it to be revoked,” Durbin said in a statement.