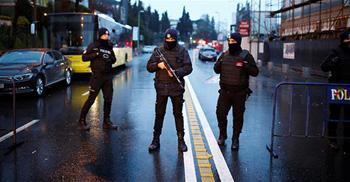 An Islamic State of Iraq and the Levant (ISIL) militant linked to the attacker of Istanbul’s Reina nightclub said he was previously detained and later released by police in Turkey.

Ilyas Mamasharipov, who ordered the attack, was among those arrested on Jan. 31 for aiding and abetting Reina attacker Abdulkadir Masharipov.

Mamasharipov, who is of Tajik-origin and arrested with his wife Marhaba Abduloeva, said in his testimony that he was detained and was taken to the foreigners section of a police station a short while before the attack. He said he was kept in the repatriation center in order to be sent back to his country, but was later released, daily Birgün reported on Feb. 2.

It has previously emerged that Mamasharipov stayed with Masharipov in the same house. According to Mamasharipov’s testimony, he admitted that he stayed with the Reina attacker for nearly 15 days.

“It’s true that we stayed with the person who carried out the Reina shooting before the attack for almost 15 days,” he said, adding that he stayed with Masharipov after his release.

At least 39 people, including a police officer, were killed when Masharipov opened fire on New Year’s Eve revelers in the nightclub in the Ortaköy neighborhood at about 1:15 a.m. on Jan. 1.

Masharipov was captured in the Esenyurt district of Istanbul late on Jan. 16. His interrogation is currently ongoing.

Those who were determined to be lacking necessary documents to stay in Turkey have been told they would be deported.

Elsewhere, an anti-terror operation was carried out in the Sultangazi district early on Feb. 2 accompanied with aerial support. The police took strict security measures during the operation and detained many suspects.