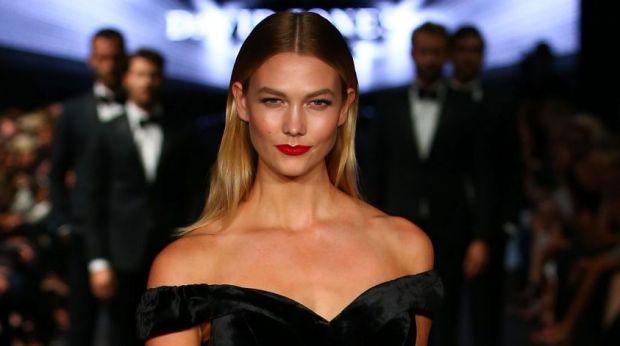 The term “supermodel” is bandied about a little too liberally in this day and age.

It’s one thing to appeal to millions of people on Instagram, like “It” girls Kendall Jenner and Gigi Hadid, it’s another to suck the air out of the room and dazzle a crowd with a simple hair toss.

Blame it on George Michael’s Freedom blaring from the speakers when Karlie Kloss took the runway for David Jones this week, but thanks to the leggy, near 6-foot tall stunner, Sydney’s fashion scene was seasoned by a legitimate emerging “super” this week.

The exercise didn’t come cheap. According to sources and unconfirmed reports, Kloss banked about $1.5 million to star in the department store’s winter campaign and to walk the runway for the bi-annual show.

Was it worth it? It was the fashion world’s equivalent of recruiting LeBron James for a Sydney Kings exhibition match.

Kloss, according to David Jones executive, David Collins, was selected for her “dynamic approach” and “major international profile”.

In front of the camera, Kloss is one of the most in demand models of the moment. She doubled her 2015 earnings by booking more than 18 advertising campaigns last year, including jobs for L’Oreal, Adidas and Swarovski. She tied for third place with Jenner on Forbes’ most recent “World’s Highest-Paid Models” list after banking more than $13 million between June 2015 and June 2016.

Similar to Jenner and the likes of the Hadid sisters, Gigi and Bella, Kloss’ commercial power is not just the ability to give a good frame or walk the catwalk. The ability of the next generation of model to connect to audiences and fans via social media is what brands are after these days. And this type of seemingly organic messaging is something Kloss does easily with 6 million Instagram followers and more than 544,000 subscribers to her official YouTube account.

While the Jenners and the Hadids of the world continue to clamour for high-profile gigs, like the Victoria’s Secret show, Kloss at just 24 she has already been an Angel of the brand and happily missed the recent show due to conflicting work commitments.

A supermodel also knows when to diversify. Look at Elle, Gisele and Heidi Klum and everyone in that George Michael film clip.

When Kloss is not being a top model – something she’s been doing for about a decade – she’s also enrolled at NYU as a part-time student, established a software coding company that offers scholarships to young women and is the co-founder of a cookie brand that makes vegan and gluten-free treats which donates some of the proceeds to charity.

Sure these extracurricular ventures are all named in the narcissistic, Kardashian-vein – Kode With Klossy and Karlie’s Kookies – but they’re not only cash generating brand extensions, they are passions she decided to pursue in order to create a “vehicle to help others,” she told Fairfax Media.

“From a distance they seem very random and people must think that this girl is all over the place,” she said. “I love to learn and about six months into taking classes I had this realisation of wanting to share what I was learning as it really can transform someone’s future. With this skill you can use it in really creative way, in entrepreneurial ways and to make social change. If you have a passion for art and fashion you can use it in a more creative way than a guy in a hoodie who doesn’t have the same ideas as you, and come up with better solutions.”

“I’ve always loved to bake, so we combined this healthy approach to baking with wanting to help provide school lunches for kids, that is all bundled into a vehicle for good. For every cookie we sell we donate school lunches. It was a really fun, random project that took a life of its own,” she said.

Kloss is also renowned for the company she keeps.

She’s apart of Taylor Swift’s revered (or feared, depending on which side of the Katy Perry feud you’re on) “squad” and she is dating Josh Kushner – the brother of Donald Trump’s son-in-law and senior advisor, Jared.

The pair were spotted at the recent Women’s Marches in the United States, rallies which were organised to protest against the new President.

Kushner, who was spotted in the crowd by Washingtonian reporter Jessica Sidman, said he was there “observing” the event.

While in Australia Kloss refused to take questions relating to her famous friends or politics because she “values my friendships”.

She did, however, touch on her relationship, something she rarely publicises to her Instagram followers, “I was definitely not planning on falling in love,” she said of their four year union.