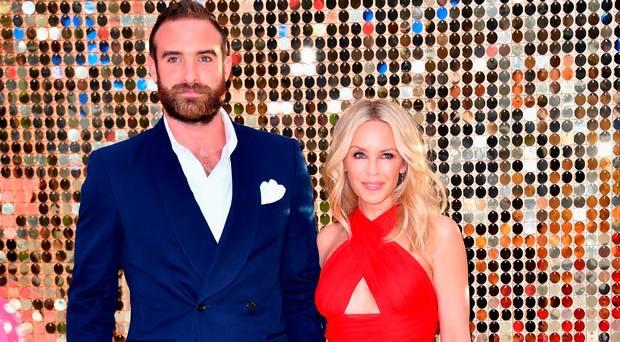 Kylie Minogue has reportedly ended her engagement to Joshua Sasse.

The 48-year-old singer and 29-year-old actor have been dating for nearly two years and he popped the question just five months into their relationship.

Sasse is said to have moved out of her home in West London.

The couple had not yet set a wedding date and she said recently she was “happy enjoying being engaged.”

“She is absolutely devastated, totally heartbroken. She really believed he was The One. But she no longer trusts him,” an insider told The Sun, which was first to announce their surprise engagement.

In November, the Spinning Around songstress revealed she would be taking her husband-to-be’s name after their nuptials.

“I’ll definitely be taking Sasse but there will be Minogue in there somewhere. Taking a different name makes a statement.

“Nobody wants to be Mr Minogue. It takes a very strong man to put themselves in that position and I fully appreciate that.

“The world around you sees it differently and a lot of guys can’t deal with that. When I look into Josh’s eyes, he is all I see and that makes me very happy.

“There’s a line in the movie Notting Hill that I always think of, when Julia Roberts is talking to Hugh Grant, and she says, “I’m just a girl, standing in front of a boy, asking him to love her.” For me, it’s that simple.’

Earlier this week, she appeared in a pre-recorded segment on Lorraine where she said she would be “taking no inspiration from Charlene’s wedding dress” from her character on Neighbours as she prepared for her own wedding.

Similarly, Sasse spoke of his wedding plans in October where he said they would consider a ceremony in Kylie’s native Australia but would be waiting until same sex marriage was legalised.

“There are chances of a Melbourne wedding but me and Kylie have talked about it and we are not comfortable getting married until this law has passed,” he told Network Seven.

“That is something that we’ve talked about and decided on.

“Why should we? Why is it fair? Why are we more important than anyone else? It’s not right and something’s got to be done about it.”

Kylie, who previously dated Olivier Martinez and Andres Velencoso, has never been shy to publicly praise Sasse, describing him as “the love of my life” in the early days of their romance.

“I have a love of my life which is just a beautiful thing. I am kind of on cloud nine most of the time because of Mr Joshua Sasse, my beau,” she said in 2015.

“People are pretty much leaving us to get on with it. I think the general consensus is, we kind of look right together. So even though on paper it might not look right, it just is right.

“Even if I try and act cool and natural, it’s written all over my face that I am very happy.”