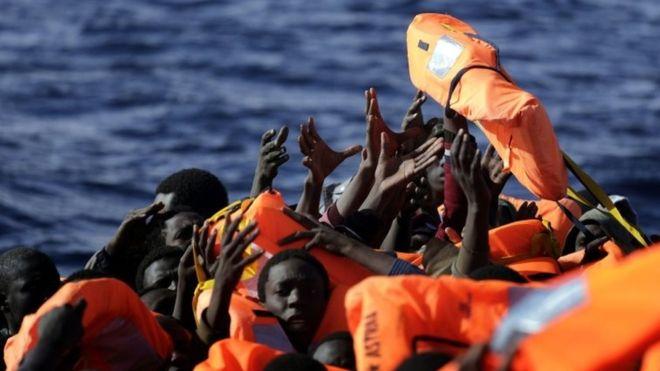 European Union leaders are to meet in Malta to discuss how to stem the influx of migrants from North Africa and the Middle East.

The summit comes after Italian PM Paolo Gentiloni said he had reached a deal with Libya on how to stop migrants from setting sail for Europe.

He pledged more funds and training to Libya to tackle people smugglers.

Hundreds of thousands of migrants each year try to reach Europe. Many of them drown while crossing the Mediterranean.

On Thursday, Italy’s coastguard said more than 1,750 migrants had been rescued in the Mediterranean within 24 hours.

Since the fall of former leader Muammar Gaddafi in 2011, Libya has lacked any effective central government and security has been in the hands of various local factions. People smugglers have found it easy to operate in the country.

“If we want to give real strength and legs to managing migration flows, then there needs to be an economic commitment by the whole of the EU,” said Mr Gentiloni.

The leaders of 28 EU member states will discuss the migrant crisis in Malta’s capital Valletta later on Friday.

The new plan is to deal with the issue at source by co-operating with the Libyan coastguard to shut down people smuggling routes, the BBC’s Kevin Connolly in Malta reports.

Mediterranean states – where the migrants land – want other EU members to take some of the new arrivals but have met with considerable reluctance, our correspondent says.

Ahead of the gathering, EU Council President Donald Tusk said that breaking smuggling rings and stopping perilous sea journeys “is the only way to stop people dying in the desert and at sea, and this is also the only way to gain control over migration in Europe”.

“This goal is within our reach,” he added.

The EU already has a military presence in international waters off Libya to target people smugglers.

Meanwhile, Mr Gentiloni said that at Thursday’s talks with Libyan Prime Minister Fayez Serraj in Rome the deal was agreed to tackle people smugglers in the North African country.

Mr Gentiloni said the agreement was “just a piece” of a broader plan that would be discussed in Valletta.

However, experts warn reliable partners in Libya are hard to find and that shutting existing routes might simply lead to the opening of new ones, our correspondent says.

An EU-Turkey deal to tackle the migrant crisis came into effect last March.

In Valletta, the EU leaders will also discuss the UK’s future after Brexit and Europe’s relations with new US President Donald Trump.

A note on terminology: The BBC uses the term migrant to refer to all people on the move who have yet to complete the legal process of claiming asylum. This group includes people fleeing war-torn countries such as Syria, who are likely to be granted refugee status, as well as people who are seeking jobs and better lives, who governments are likely to rule are economic migrants.