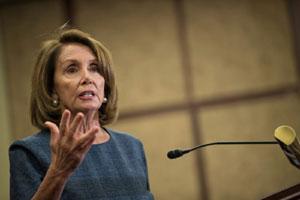 “What’s making America less safe is to have a white supremacist named to the National Security Council as a permanent member, while the chairman of the joint chiefs and the director of national intelligence are told ‘Don’t call us, well call you,’” she said during her weekly press conference.

Pelosi added that she believes it’s “a stunning thing that a white supremacist” would be a permanent member of the National Security Council. Trump and his administration have seen intense backlash from Democrats and Republicans since announcing the NSC shakeup over the weekend.

Democrats like Pelosi were already worried about Bannon’s role in the White House, and the administration’s actions in recent days have cemented those fears. In Trump’s first two weeks in office, Bannon not only got himself a seat on the coveted NSC, but also helped write the president’s inaugural address and his executive order banning refugees.

But Pelosi went further on Thursday, also questioning Trump’s ability to serve as president. After her comments about Bannon, she mentioned that House Oversight Committee Chairman Jason Chaffetz was considering legislation to require an independent medical assessment of the President, CNN reports.

“If you’re going to have your hands on the nuclear codes, you probably — we should probably know what mental state you’re in,” Pelosi said. “I can’t wait until he introduces that legislation, to be able to join him as cosponsor of that.”