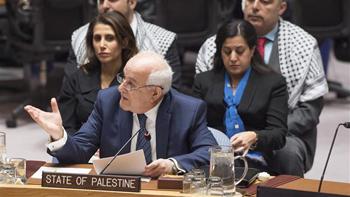 The Palestinian envoy to the UN has lashed out at Israel for an “extreme barrage of illegal behavior” over the last 10 days, urging the Security Council to take action against the regime’s settlement expansion.

Speaking to reporters at the UN headquarters, Riyad Mansour denounced Israeli Prime Minister Benjamin Netanyahu for approving the construction of some 6,000 settlement units in the past few weeks in an “unprecedented” move.

The Palestinian diplomat also warned that Tel Aviv is “destroying the two-state solution by the continuation of this illegal behavior.”

In December 2016, the United Nations Security Council adopted Resolution 2334 that denounced the Israeli settlements as a “flagrant violation of international law.”

Emboldened by the all-out support of the new US administration, Israel has in recent weeks defied Resolution 2334, approving plans for the construction of some 5,500 settler units in the West Bank and around 500 others in East Jerusalem al-Quds.

However, Israel’s Jerusalem Post reported Thursday that theadministration of US President Donald Trump had warned Tel Aviv to stop announcing settlement plans, which are “unilateral” and “undermining” what it called Trump’s efforts to forge Middle East peace.

In an interview with the daily, a US administration official underlined Trump’s commitment to a “two-state solution” to the Israeli- Palestinian conflict.

White House Press Secretary Sean Spicer also said that Washington’s “desire for peace” between Israel and Palestine has not changed.

“While we don’t believe the existence of settlements is an impediment to peace, the construction of new settlements or the expansion of existing settlements beyond their current borders may not be helpful in achieving that goal,” he added.

Over 230 settlements have been constructed since the 1967 Israeli occupation of the Palestinian territories.

All settlements in Jerusalem al-Quds and West Bank are viewed by the international community as illegal and subject to the Geneva Conventions, which forbid constructions on occupied territory.