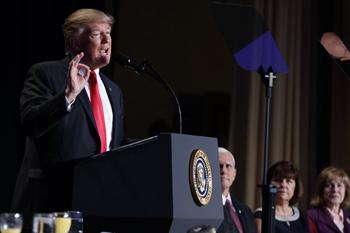 FEBRUARY 2, 2017  WASHINGTON—Donald Trump has never been known primarily as a man of faith. But in his first appearance Thursday at the National Prayer Breakfast, President Trump reaffirmed that he will be a strong advocate for the priorities of conservative Christians – a key part of his political base.

The first days of Trump’s presidency have been marked by a series of actions demonstrating that commitment. And on Thursday, he added another: a pledge to overturn a law that forbids political speech by tax-exempt churches.

“I will get rid of and totally destroy the Johnson Amendment, and allow our representatives of faith to speak freely and without fear of retribution,” Trump said, referring to a 1954 measure that bars churches from endorsing and opposing political candidates. Congress would have to approve a repeal.

Trump had made such a pledge during the campaign, but his reference Thursday added new urgency to that goal. And it builds on an already-robust record of advocacy for the priorities of religious conservatives:

Trump is also reportedly considering an executive order titled “Establishing a Government-Wide Initiative to Respect Religious Freedom.” Such a move would reassure religious conservatives, though critics say it could curtail the rights of gay, lesbian, bisexual, and transgender people.

“Evangelicals are particularly important to Trump,” says John Green, an expert on religion and politics at the University of Akron in Ohio. “On two issues – abortion and the Supreme Court – he made some pretty strong promises during the campaign, and at least so far he has kept them.”

The irony is lost on no one. Trump’s personal background – a thrice-married, casino-owning billionaire who at times has spoken of women in crude terms – does not suggest a pious man. Trump himself referred to his past at the Republican National Convention last summer. He thanked “the evangelical and religious community” for its support on his way to the GOP nomination, then added: “I’m not sure I totally deserve it.”

“During the campaign some polls seemed to show there would be a falloff in the [evangelical] vote for Trump,” says James Guth, an expert on religion and politics at Furman University in Greenville, S.C. “But when it came to Election Day, they fell in line.”

Dislike of Democratic nominee Hillary Clinton, and her strong support for abortion and gay rights, also helped. But evangelical voters could have just stayed home. What proved to be pivotal, says Professor Guth, is the Supreme Court seat left vacant by the death of Justice Antonin Scalia and Senate Republicans’ unwillingness to consider President Obama’s nominee, Merrick Garland.

“My evangelical friends, that’s what sealed the deal for a lot of them,” Guth says. “They were very disturbed by Trump, but then they thought about that Supreme Court seat.”

Evangelical leaders were divided over Trump during the campaign, with some strongly supporting him and others in the “never Trump” camp. The never-Trumpers are still worth watching, says Guth, “because if Trump undertakes policies that run against the evangelical grain, there will be a group of evangelical leaders willing and ready to criticize him. And that might turn some opinion around in the long run.”

But for now, Trump is staying close to his religious base of support. One of the first interviews of his presidency went to the Christian Broadcasting Network, in which he said that, as president, he relies on God more than ever.

“I would say that the office is so powerful that you need God even more,” Trump told The Brody File last Friday. “There’s almost not a decision that you make when you’re sitting in this position that isn’t a really life-altering position. So God comes in even more so.”

At Thursday’s prayer breakfast, Trump spoke of how the prayers of Americans have sustained and inspired him.

“What I hear most often as I travel the country are five words that never, ever fail to touch my heart. That’s, ‘I am praying for you,’ ” Trump said.

Trump is a professed Presbyterian, and was raised in that faith, with his Scottish-immigrant mother as his primary influence. On Thursday, he mentioned being sworn in on the Bible from which his mother taught him and his siblings as young children.

But his religious upbringing also included attendance, as a teenager, at Marble Collegiate Church in Manhattan, where the Rev. Norman Vincent Peale preached “the power of positive thinking.” Dr. Peale had two identities – one as a motivational speaker, the other as a traditional preacher, the Rev. Michael Brown, senior minister of Marble Collegiate, tells CNN.

“Out there in civic centers he would say, over and over, ‘You can, if you think you can,’ ” Reverend Brown says. “In the pulpit of our church he would quote Philippians 4, ‘You can do all things through Christ.’ ”

Trump biographers point to Peale’s “positive thinking” philosophy as central to Trump’s drive as a businessman.

“Pence is a poster child for evangelical conservative politics, and has been for a long time,” says Guth. “His presence [on the ticket] reassured a lot of people.”

One issue of concern to Christian conservatives, gay rights, may be one in which Trump isn’t prepared to go all in. After recent reports that Trump was ready to rescind an Obama order granting workplace protections for federal LGBT employees, the White House put out a statement saying those protections would remain.

The statement added that “the president is proud to have been the first ever GOP nominee to mention the LGBTQ community in his nomination acceptance speech.”

Professor Green says that Christian conservatives are likely to approach this issue pragmatically. “They have fairly low expectations of what they expect from the political leaders they support,” he says.

In addition, young evangelicals are increasingly comfortable with the concept of same-sex marriage and other gay rights in a way that they are not with abortion.

But none of this means that Trump will not eventually enact a measure to promote religious freedom in a way that is seen as hostile to gays and lesbians. The proposed draft order on religious freedom could allow companies that do business with the federal government to decline to work with gay and lesbian couples on adoptions and other services, according to ABC News.