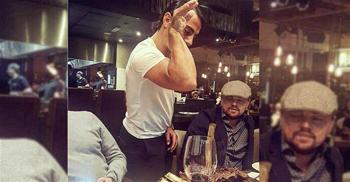 The co-partner of Turkey’s global Nusr-et chain of grill houses, Nusret Gökçe, who recently became a social media phenomenon for his meat-cutting and salt-drizzling skills, has served Oscar-winning actor Leonardo DiCaprio at his restaurant in Dubai.

DiCaprio ordered a steak, after which “Salt Bae” Gökçe was photographed performing his famous salt-drizzling move while DiCaprio looked on in wonder.
Gökçe posted a photo of the moment on his official Instagram account, writing under the photo “He said, ‘You are the real Oscar performer’” along with the hashtag #saltbae.

Gökçe recently spoke to Hürriyet about the viral video, which has been watched by millions of people worldwide, in which he cuts and salts meat with a huge butcher’s knife.

“That move at the end [salting] actually came automatically. I didn’t do it to show off. It’s just my signature. You could think of it as a kind of final touch of a painting. It was a final touch to the meat; I was blessing the meat,” he said.

Gökçe also said Nusr-et would be opening branches in New York and London in the next few months, adding that success was possible by “telling stories and drawing people’s attention.”