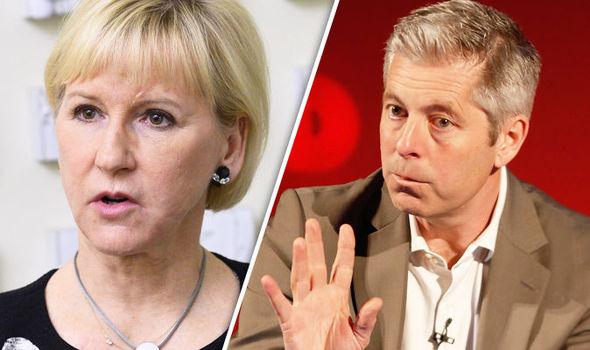 SWEDEN’S Deputy Prime Minister has warned the UK will have to face the “consequences” of Brexit – including a hefty divorce settlement.

Margot Wallstrom, also the country’s Foreign Minister, refused to confirm if the rumoured amount of £50billion was one the UK should expect despite being repeatedly asked on BBC Radio 4’s Today programme.

Presenter Justin Webb asked the politician, who said she was “very worried and concerned about Brexit”, if the figure was reasonable.

“Well that’s for the people in the UK to decide,” she replied, and when asked “why” she added: “Well it’s your decision to leave and you will have to take the consequences I guess.”

The radio host asked: “Do they have to be the consequences do you think? Because what the British Government says is ‘hang on a second, this is a treaty process, it’s agreed for in the Lisbon treaty’.

“There’s no reason we should be fined as it were – why the extra cost should come to Britain – they should be born by all the EU countries because this is part of an EU approved process.”

Ms Wallstrom hit back and said: “No, I think you should just stick to the rules of the treaties, I think that is what we need to apply in this process.”

The pair went back and forth over whether the figure was “reasonable” with the Swede insisting it was “for the UK and the people in the UK to decide” if it was an acceptable sum.

She continued: “I have no idea about those figures but we have just recently understood exactly what kind of process the UK sees from now on and I think that will, of course, help us also to set a process in motion.”

The former European Commissioner for the Environment warned the UK to “follow the rules” once more.

“You’re saying there could be that there will be a high price, a financial price, and if Britain wants to leave, it will have to pay it,” Webb asked.

Ms Wallstrom replied: “I mean I think you should just follow the rules and the treaties.”