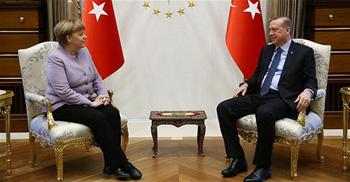 German Chancellor Angela Merkel and President Recep Tayyip Erdoğan have pledged further cooperation in the fight against terrorism during Merkel’s visit to Ankara, while the German leader also stressed the impartiality of her country’s courts regarding the extradition of Turkish coup attempt suspects.

“We have discussed what we can do in the fight against terrorism. International terrorism is not an issue that any single country can manage alone. There should be international cooperation. As two NATO allies, I believe our cooperation with Germany, which is also part of the [anti-ISIL] coalition forces, should continue just as we performed for Ukraine,” Erdoğan said in a joint press conference with Merkel on Feb. 2.

Merkel also stated that the two countries should more closely cooperate in the fight against “every kind” of terrorism.

Ankara wants Berlin to hand over suspected Fethullahist Terror Organization (FETÖ) members, including two high-profile Gülenist prosecutors, Zekeriya Öz and Celal Kara, who are currently believed to be in the country.

Merkel said Germany was “determined to struggle against terror but evidence needs to take a step forward.” She added that the courts are examining the issue and vowed that her country will respect the “impartial evaluation” of German courts.

Merkel also referred to claims of spying by Turkish clerics in the country, after Ankaraallegedly asked Muslim imams sent to “Ditib,” Germany’s largest association of mosques, to provide information about followers of U.S.-based Islamic preacher Fethullah Gülen, who the government accuses of being behind the failed July 2016 coup attempt.

Merkel said Turkey had put efforts for the integration of refugees. “What is important for me is to continue discussions and find solutions,” she noted in an indirect reference to the standstill in the deal, which includes visa-free travel for Turkish citizens in return for the refugee readmission agreement.

“I expressed the financial support that EU promised should be flown as soon as possible. 2.2 million euros were given. Of course we expressed that this financial contribution should flow to concrete projects,” she said.

On the deal, Erdoğan praised Merkel’s efforts in putting an end to deaths in the Aegean Sea but the European Union has failed to fulfill its duties, according to presidency sources.

Turkey shared its concerns over the activities of terror groups –namely the outlawedKurdistan Workers’ Party (PKK), Fethullahist Terror Organization (FETÖ) and the Revolutionary People’s Liberation Party-Front (DHKP-C) during the Erdoğan-Merkel meeting, according to the sources.

Ignoring such activities contradicts with the ties between allies, the sources said.

The economic ties, which have been improving starting from the second half last year, were also discussed, the sources said.

Turkey also demanded an easing for Turkish citizens in Germany during the upcoming referendum voting.

Erdoğan told Merkel that German officials have occasionally made statements on freedom of speech in Turkey depending on “wrong, imperfect and sided information.”

The German chancellor also stressed the importance of press freedom and freedom of opinion in Turkey during talks with President Erdoğan.

“With the [attempted] coup we saw how the Turkish people stood up for democracy and for the rules of democracy in Turkey. That is exactly why, in this decisive phase, it is important that freedom of opinion is upheld and in connection with this we have spoken about press freedom,” Merkel said.

Asked about the upcoming referendum on constitutional changes that would shift Turkey to an executive presidential system of governance, she said “everything should be done to ensure that separation of powers and plurality of opinion are guaranteed.”

“Everything should be done so that social pluralism and separation of powers are under guarantee in such a profound political transformation,” Merkel said, adding that she had conveyed her recommendation to Erdoğan that Organization for Security and Cooperation in Europe (OSCE) observers be present during the referendum.

“The democratic principles that the Turkish public defends should be protected in the new system,” she said.

Commenting on the subject right after Merkel’s answer, Erdoğan criticized the opposition parties in Turkey for “misleading” over the content of the amendment.

“The opposition’s thesis on the separation of powers in the presidential system, which is being carried out now, hasn’t got the slightest bit of truth,” he said.

“The legislative, executive and judiciary will still exist. There is no question regarding their destruction or the destruction of the separation of powers,” Erdoğan added.

Meanwhile, the Turkish president also reacted against Merkel’s use of the phrase “Islamist terror,” saying it would be disappointing to use the term due to ISIL.

“Please don’t use it. As a Muslim president, I cannot accept it,” Erdoğan said.

In her reply, Merkel stressed the difference between “Islamic” and “Islamist” and said she attributes great importance to freedom of religion in Germany.