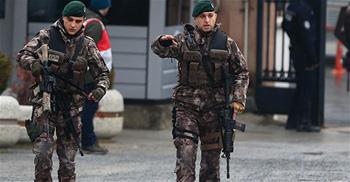 In a meeting with representatives of broadcasters on Feb. 1, RTÜK gave information on broadcasting bans introduced with state of emergency decrees and the measures it will take if the rules are broken.
The meeting was reportedly organized to address “confusion” that has occurred regarding broadcasting under the ongoing state of emergency, which was declared after the failed July 2016 coup attempt. The measures have been distributed in document form to broadcasters’ representatives.

According to the new measures, broadcasters will only be permitted to report terror attacks with statements from officials and tickers, without footage from the scene. The phrase “breaking news” will not be permitted in the tickers.

The broadcasters will not be able to use any video footage or photographs of explosions or terror attacks other than those provided by officials. The moment of terror attacks and scenes showing the aftermath of the attack will not be broadcast, as well as the footage that shows people’s fear and panic at the site of the terror attack.

The measures also state that correspondents and anchors will not be permitted to “use exaggerated statements involving agitation.”

No information regarding where the incident took place and no map of the scene will be permitted to be shown, neither will be the names of terrorist organizations suspected of carrying out the attack.

Broadcasts “including criticism and commentary” will also not be permitted according to the new regulation, while regular broadcast streaming will not be allowed to be interrupted for news that is part of the gag order.

RTÜK has placed special emphasis on attacks on what it described as three “brand cities” – Istanbul, the western province of İzmir, and the southern province of Antalya.

Particularly since summer 2015, Turkey has been subjected to a wave of terror attacks by the outlawed Kurdistan Workers’ Party (PKK) and the Islamic State of Iraq and the Levant (ISIL).