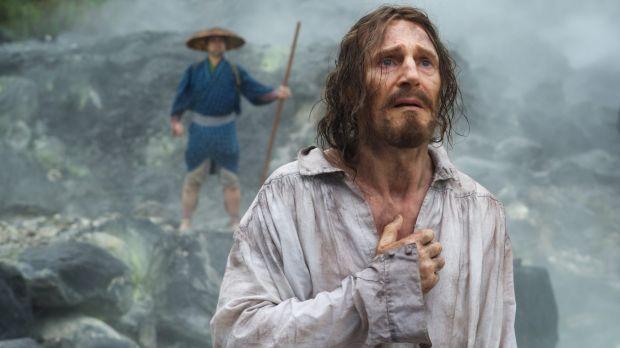 Stephanie Bunbury
For quite a few years now, Liam Neeson has been seen less as an actor and more as a genre. With Taken (2008), he was branded as the archetypal wronged man with a gun who goes alone after the bad guys. So what if he was heading for his 60s? That broken boxer’s nose, towering height and his particularly Irish brand of urgent intensity were enough to make him an action hero; he could even be found slumming it with his mate Ralph Fiennes in the Titans comic-strip blockbusters, the two of them staring at each other’s foreheads because if their eyes met during a scene they would get the giggles. Liam Neeson, who had once been a stalwart of Dublin’s venerable Abbey Theatre. Liam Neeson, who was Oskar Schindler, who was Michael Collins.

Neeson admits that he sees his role in Silence as a swing away from what he calls “silly shoot-’em-up movies”. Silence, directed by maestro Martin Scorsese, is absolutely serious filmmaking. Adapted from a novel by the Japanese literary author Shusaku Endo, it tells the story of two young 17th-century Portuguese monks who go to Japan to find their mentor, a Jesuit missionary called Ferreira. Under the Sho-gun, Japan has closed off almost all foreign trade and the army in Japan is in the throes of killing off Christian converts, having already annihilated the priests. Rumour has it that Ferreira has survived by publicly rejecting his religion. He is even supposed to be helping the government root out any stray faithful. If it proves true, then he has damned his soul to hell.

For Scorsese, Silence is a passion project it has taken 20 years to finance and make. Andrew Garfield and Adam Driver play the young acolytes; Neeson plays the real-life figure of Father Ferreira, the apostate.

“I found the script very, very revealing and a real extraordinary meditation on faith and doubt and God himself, you know,” he says. He is convinced, even if the film does not show this conviction, that Ferreira maintained his faith to the last.

“He was at the time quite an important intellectual, a very learned man as indeed many of the Jesuits were at that time. The Japanese were very aware of who he was and what he was doing intellectually in philosophy and astronomy and especially medicine. Personally I think he felt he could better serve mankind by apostasising. Maybe it’s not very clear, but that’s what was going through my head. That he actually never did give up the faith.”

Growing up in a war-torn Northern Ireland, Neeson says he wanted to become a priest himself. “There were certainly links with my own upbringing. I was brought up a very staunch Catholic. Like Martin, I was an altar boy for a few years and thought about the priesthood myself in a very youthful, romantic way, you know. When I think back on it now, I did fall in love with the theatricality of the Catholic ceremonies: seeing people getting married, benediction, candles, processions and incense and stuff, you know, I certainly would say it was a big influence on me becoming an actor.”

There are also echoes he recognises in the Japanese anxieties about foreign invasion. “The Sho-guns did not want to be colonised. And it seemed to be the history of the Portuguese and the Italians and the Spanish that they would send their missionaries out to convert the people, maybe appease them in some way, before sending in the big troops. And without getting too heavily into Irish-British politics, I was very conscious, you know, of Ireland’s being colonised by Britain.”

Of course, the Neeson brand’s transition from serious to silly and back again is not really so straightforward. He had done his share of blockbusters in the pre-Taken years; he was so keen to play Qui-Gon Jinn in Star Wars: the Phantom Menace (1999) he reputedly did not even read the script. And the year after Taken came out, Neeson’s life was turned upside down when his wife, Natasha Richardson, died after a skiing accident, leaving him with two sons in their early teens and a ton of grief. Under the circumstances, making daft films where he ran over roofs looking like thunder sounds like just what the doctor ordered.

“You know, they are fun to do,” he says equably. “I will certainly not deny that: they pay pretty well and I enjoy them. l love hanging out with these stunt guys rehearsing fights and doing all that stuff.” He once said he never even expected Taken to be shown in cinemas; when it was successful he was “a tiny bit embarrassed by it”. Not that he is tired of doing them, even now. “The Taken films to me are kind of Tom and Jerry cartoons, you know? But enjoyable. Very enjoyable, don’t get me wrong. I’m hoping to do another one later this year, not Taken but something along that line.”

Whatever kind of film you’re making, he points out, the process is the same. Lights; camera; action. In between “action” and “cut”, you do your best. Even so, working with Martin Scorsese is a qualitatively different experience. “He really makes you confront yourself as an actor and he really wants the truth from your performance. He can see when you’re lying, when you’re ‘acting’, and I love that. It’s f—ing terrifying too, I must admit, especially for the first couple of takes, but then you feel you can breathe and you can tell yourself, as I did on Silence, that yes, I, Liam Neeson, am enough for this character. Trust the fact he has cast you because of you.”

And there is clearly a questing spirit in Neeson that keeps bringing him back to matters of the spirit. Way before Taken or Clash of the Titans, he supported Robert de Niro in Roland Joffe’s The Mission (1986), a film about Jesuits going to Colombia to proselytise the Indians in the 1700s. Father Daniel Berrigan, an American priest who famously burned his draft card during the Vietnam War, was an adviser on the film.

“A great, great man. I was very fond of him. And he just taught me to see God in everything. Everything! Not just in a church, or not just saying prayers or going to Mass, but in every walk of life, to try to see God in all of it. And that’s a daily thing for me now.” Is his faith stronger for it? “I think my faith in a god gets stronger and then sometimes it just gets absolutely shattered. I do doubt, all the time. I guess the doubt is very much hand in glove with my faith, you know.”

Father Berrigan took the cast of The Mission through some of the spiritual exercises devised by the Jesuits’ founder Ignatius Loyola. To Leeson’s astonishment, they were very much like the exercises he learned at acting school. “Stanislavsky, who I guess kind of defined what modern acting is, you know, based all his actors’ exercises on the spiritual exercises of Ignatius. That is incredible, isn’t it? I remember learning that, as I say, in the jungles of Colombia and it was like a Eureka moment for me. I felt euphoric. I thought ‘oh my gosh, maybe doing this acting lark is OK. Maybe that’s my new faith.”‘