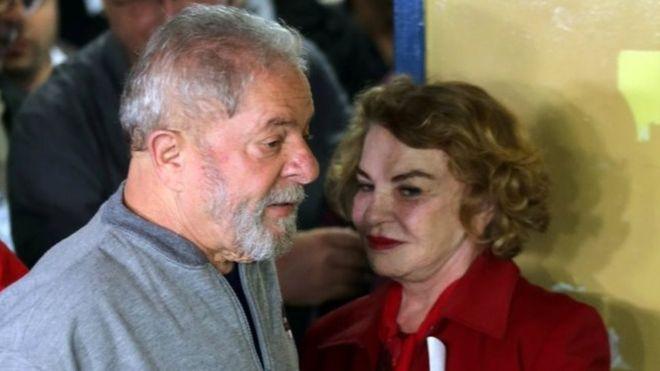 He said Marisa Leticia – who had been earlier pronounced brain-dead – passed away on Friday evening. She was 66.

The funeral service will be held in Sao Paulo on Saturday and her body will then be cremated.

She was taken to hospital last week with a brain haemorrhage. Doctors later said her condition was “irreversible”. Her organs will be donated.

“Luiz Inacio Lula da Silva and his family are sad to confirm the death of Marisa Leticia Lula da Silva,” Lula’s spokesperson said in a statement.

“The former Brazilian president’s wife of 43 years passed away peacefully this evening in Sao Paulo surrounded by her family.

“The whole family is absolutely devastated by Marisa’s untimely death and this is a sad day for many people across Brazil.”

Regional leaders have sent their condolences to Lula, and there was a minute’s silence in Brazil’s Congress.

Marisa Leticia had helped Lula found the Worker’s Party, and the former president said in a Facebook message that she had made its first flag.

Once adored by many in Brazil, Lula ended his second term in 2011 with an 83% approval rating.

He had boosted Brazil’s global profile and overseen rapid economic growth during a commodities boom.

But last year Lula and his wife became ensnared in a far-reaching corruption investigation involving the state oil company, Petrobras.

They said the accusations against them were politically motivated and designed to prevent Lula standing for president again in 2018 elections.