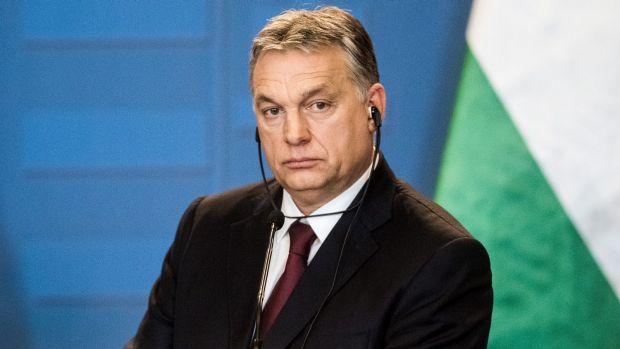 Helen Womack
Budapest: While Donald Trump was busy antagonising Iran, offending Australia and insulting Arnold Schwarzenegger, Vladimir Putin made a quick, businesslike visit to his best friend in Europe and showed how he intends to defend Russia’s interests in this new age of uncertainty.

Mr Putin’s talks with Hungary’s right-wing Prime Minister Viktor Orban coincided with a flare-up of the war in Ukraine. In the joint press conference afterwards, the Kremlin leader departed from his chosen economic script to field one question on Ukraine, making clear Russia was not about to apologise for any of its actions there.

The press conference was classic Putin. Amid tight security, journalists were kept waiting in the snow for admission to Hungary’s opulent parliament. Four questions were allowed, two from the local and two from the Russian media. In a slick performance, Mr Putin showed his grasp of economic nitty gritty while avoiding the elephant in the room – Russia’s part in the disastrous state of East-West relations.

Both Mr Putin and Mr Orban, proud to be illiberal, admitted sanctions against Russia were hurting them and expressed hope for pragmatism in international relations under President Trump. The Kremlin leader allowed his host to speak for them both when Mr Orban said he wanted a world in which economics and politics were not mixed.

“Anti-Russian policies have become fashionable in the West,” said Mr Orban, who of all EU leaders is the most sympathetic to Russia’s case for sanctions relief. “The world is in the process of a substantial realignment and we believe this will create more favourable conditions for the EU and Russia.”

Only the correspondent from Izvestia dared to raise the question of eastern Ukraine, where Grad rockets have been falling on residential areas and over 30 people have been killed in a new spike in fighting between Russian-backed separatists and the Ukrainian army.

Mr Putin laid all the blame on Kiev for violating the ceasefire and failing to meet the terms of a two-year-old peace agreement. His tone became flinty when he said: “The Ukrainian leadership needs money and the best way to get the EU, the US and international organisations to pay is by posing as a victim of aggression.”

Ukraine could quickly become a test for President Trump, mired in accusations that he may in some way be beholden to Russia.

Soon after taking office, Mr Trump had an apparently friendly but not very specific or binding telephone conversation with the Kremlin leader. Afterwards, the Russian media changed its anti-American tune and put out the line that former President Barack Obama was to blame for all the ills in the US-Russia relationship.

“After raising the bar of rabid anti-Americanism impossibly high, TV pundits are visibly relieved simply to write off the whole conflict as an ex-president’s legacy, and to start praising Trump with the fervour once reserved for deriding Barack Obama,” said The Moscow Times.

Russia is subject to various targeted sanctions from both the US and the EU. Some can be undone with a stroke of President Trump’s pen while others have passed into American law. The US Treasury said on Thursday it would allow American technology firms to make limited transactions with Russia but Mr Trump said “I haven’t eased anything” and the US ambassador to the UN said sanctions over Ukraine remained. Senate Armed Services Committee chairman John McCain, a Republican, advised Mr Trump “in the light of the latest Russian attacks and the prospect of future aggression against Ukraine” to help the Ukrainians defend themselves.

Meanwhile at their meeting in Budapest, Mr Putin and Mr Orban focused on energy and the Kremlin leader assured Hungary that Russia was a reliable supplier of gas. When it comes to geopolitics, Mr Putin will shift blame and seek to do deals, with the implied threat that Russia can turn conflicts on and off like the gas in the pipeline.